"Red Room," #1 is an Immensely Disturbing and Readable New Comic From Ed Piskor 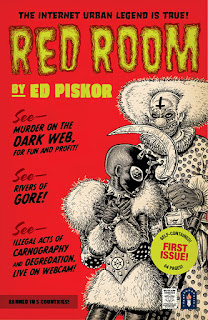 The first issue of, "Red Room," by Ed Piskor and published by Fantagraphics is horribly disturbing and fascinating. Perhaps that is one reason that being about modern technology and cryptocurrency, it heavily reminds of the underground comics of decades past in how, "Have no cares," it is about its content. Each issue is its own self-contained story set in a World where online streams or murder and general depravity have achieved some mass-market awareness and despite being illegal do quite well online thanks to untraceable cryptocurrencies such as Bitcoin and identity-hiding tech.

The comic features some of the grossest illustrations of violence I've seen in a comic for some time (it makes sense Piskor mentions Tim Vigil as an inspiration because, "Faust," pushed the limit of gore too), but it isn't just torture-porn, there is some humor and statements about society and its pathos mixed in too. The black-and-white style and over-the-top nature of the gore made me think of those old extreme underground comics that Crumb, Spain, Wilson, and so forth would do that pushed the envelope of taste--although those comics were generally more in hot-water for sexual content as opposed to just violence, and there ain't anything especially sexy in, "Red Room."

The mysterious underworld of internet-streamed torture and murder found in, "Red Room," is not for the faint of heart and I am still somewhat astounded a mainstream-ish publisher like Fantagraphics is putting this out (they did publish some wild stuff on their, "Underground," imprint, but this is the main line). That said, if you can stomach how grotesque some of Piskor's illustrations can be, there is an intriguingly twisted story to be found here. Sometimes it seems to just be shocking for the sake of shock, but it overall impresses. With each issue telling its own story I am curious where things will go next.