"Shadow Doctor," Has Been an Amazing Comic 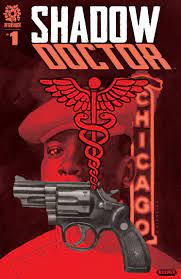 "Shadow Doctor," is published by Aftershock and is based on the true story of writer Peter Calloway's grandfather, Nathaniel Calloway. It follows Nathan as he strives to become a doctor during the prohibition era, can't find work at any hospitals due to being black, and ends up serving as a secret doctor for such mobsters as Al Capone. With art by Georges Jeanty, it has been a fantastic read for the four issues that have come out so far (the final fifth issue is due in July, I believe).

"Shadow Doctor," has been intense as we follow Nathan juggling his desire to practice medicine and help others with his fear he is only helping terrible men do bad things. Peter Calloway is careful to never totally excuse his grandfather's actions or heap scorn on him, he was just a man struggling to survive who did what he felt was necessary to do the most good for others--even if it meant some questionable choices. I'd wholeheartedly recommend reading, "Shadow Doctor," by picking up the issues that have come out or once the trade is released.