Bad Idea Comics is Ending, but is it Really? 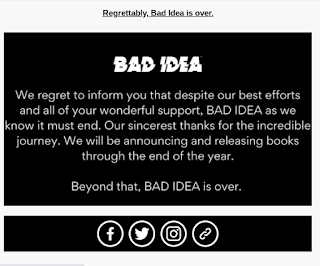 Bad Idea Comics is a publisher I have followed with a close eye. They release comics directly to stores with specific rules and their comics have been quite good--although that fact is often overshadowed by the FOMO of how they can be hard to get. That has resulted in them being a huge market on eBay and the like. Has the company itself been successful though? It seemed that way, but suddenly today I and others got a press email stating that at the conclusion of 2021 we would see the end of Bad Idea. I don't buy it.

Bad Idea loves to do weird promotions or otherwise troll people. Much of the internet is convinced this is all a ploy--despite what some creators for the company may claim--and 2022 will see this publisher perhaps, "Relaunching," with a new name or different distribution methodology that is more traditional. Basically, almost everybody is saying stuff like, "Guess we're getting, 'Good Idea Comics,' in 2022, eh?" Even the email says, "...as we know it," in regards to Bad Idea ending. This isn't a complete death of a publisher as we have seen on many occasions, this is most likely a rebranding. There is a 1% chance the company is actually folding, but I'm pretty sure Bad Idea is doing this to get people talking about it again, and here I and the rest of the web am, doing just that. Well played, Bad Idea, well played.