"Crash Site," is An Intriguingly Weird Graphic Novel That Struggles to Find the Right Tone 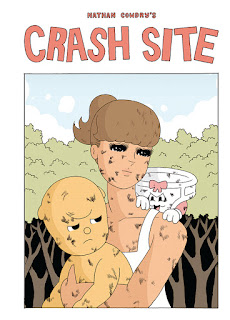 I saw one of my favorite comic creators, Simon Hanselmann, was heaping praise upon the original graphic novel, "Crash Site," by Nathan Cowdry. I also saw The Comic's Journal's Hillary Brown reviewed it. I read, "Crash Site," for myself (bought it from our local bookstore, Left Bank Books), then read what Brown thought and found we agreed on a good amount.

"Crash Site," is about a girl named Rosie who with her talking dog, Denton, are trying to smuggle cocaine. However, their plane crashes and things otherwise go haywire as a talking pair of underpants complicate matters further. The comic has a number of talking animal-human figures as well as that underwear which is, "Alive," in some sense. It gives everything a bit of a surrealist air and Cowdry's illustrative style reminds me a bit of if Charles Burns and Michael Deforge were mashed into one person--I mean that a compliment, by the way.

The plot sounds a bit straightforward and it is except for a bunch of random flashbacks and dream sequences that give everything even more of an air of unreality. "Crash Site," is loaded with sex jokes too, usually with a harsh and nihilistic tone as it either seems to be mocking, "Wokeness," or is simply poking fun at PC culture a little bit--such as in a scene where Denton excitedly reads a magazine dedicated to a woman brutally harming the Simpson's Apu in a comedic manner. Is, "Crash Site," making fun of people offended by Apu? Is it just having a laugh at the character's expense and actually pro-PC? One really can't tell as Cowdry seems more interested in, "Going there," than making an actual statement sometimes.

The few times the comic flirts with being heartfelt--such as when Denton is truly worried if Rosie is okay after the plane crash as she falls ill from a mysterious tropical illness--it immediately follows up those moments with gross-out jokes or brutal bloody violence. It is intriguingly weird at times but struggles to get out of its own way. Does, "Crash Site," want to tell a dramatic-and-surrealist story about drug smuggling, plane crashes, and a dangerous rainforest? Does it want to focus on jokes about jizz, public urination, and flashing strangers at the beach? It kind of wants to do both, and that makes it a struggle for it to really succeed at either as the tone of the comic just lurches all over the place. 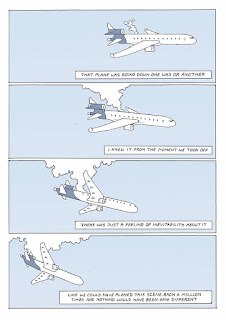 Tonal qualms aside, "Crash Site," is a gorgeous book. Cowdry's choice for the font in the comic is a bit odd, with the stark design of the text sometimes making it a little hard to read for no apparent reason other than Cowdry wanted a unique font. The art itself is lovely, however. Whether Cowdry is drawing a quiet and sweet moment or something more raunchy like Denton voyeuristically peering over the rocks at a woman peeing by the beach, everything is gorgeous. Whether regular humans or strange hybrid-looking creatures, the characters are well fleshed out in their appearance even if the written characterization is at times lacking. Even when the comic isn't quite comfortable in deciding on a tone, the art always has a lovely assured vibe.

"Crash Site," flirts with being spectacular, but lets its hesitance to be truly earnest or totally nasty leave it in suck in a middle-ground of looking amazing but not having much to say. I quite enjoyed reading, "Crash Site," even with its flaws, and would wholeheartedly recommend it.