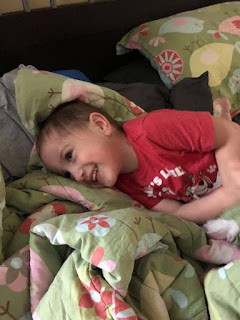 Today we went to Walmart (an evil empire for sure, but sometimes it has great deals) to get some grocery items. While there our son, Clarkson, went up to the big coolers that hold frozen foods as he loves to open and close them. It is a newer infatuation of his and he could spend the whole day in there running from cooler to cooler opening and closing the doors with delight. The thing is, we can't stay there all day so often after letting him do it for a bit we will tell him it is time to go. Sometimes he is willing to leave the frozen food area without much protest and other times he gets upset. Today he got upset.

Instead of walking through the rest of the store without being mad, Clarkson yelled loudly and did this thing where he goes limp and tries to use all his body weight as he collapses to the floor so we let go of his hand and he can run back to the coolers. While he was doing this a number of people walking by just smiled as they understood kids can be difficult sometimes. However, an elderly man (probably in his 70's or so) decided to say--when he thought he was out of our earshot no less--"Whack him!" I was a bit further away from the man so I wasn't sure if he had said, "Whacko," or what, but my wife was closer and heard him clearly. She responded, "He has autism, so I don't think we'll whack him." The man grumbled something else as he walked away.

That man knew nothing about our family, what kind of special needs our son possibly had, or anything else. Still, he felt it necessary to tell some strangers they should hit their child because he saw a toddler who was upset. Even if Clarkson were neurotypical and throwing a fit we still would not strike him as hitting your kids is just a bad idea in general (plenty of research shows that). Why some stranger felt he needed to say his unsolicited parenting advice to us is beyond me. He could've just kept his mouth shut, but chose to make a comment, and for what? To shame us as if we were ineffectual parents? I'm not sure what his main motivation was, but he came across as an ignorant jerk. Please, never offer strangers advice on parenting. You don't know their situation and you aren't helping.