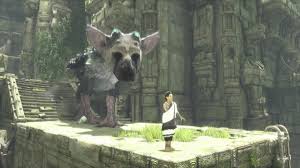 As someone who loved, "Ico," and admired what, "Shadow of the Colossus," set out to do even if I didn't like it quite as much, the long and troubled development history of, "The Last Guardian," is something I've followed off-and-on throughout its many, many, many years (when five years is an eternity in video-games taking nearly double-that is madness). I of course recall when it was announced by Sony how the game was for sure alive and would be out sooner than later, but I thought something would eventually happen to delay it into nonexistence. I mean, these games that enter development Hell either never escape or come back as horrific examples of things that should have stayed dead ("Duke Nukem: Forever," is a prime example). Imagine my surprise then when I was reminded that, 'The Last Guardian," in fact comes out tomorrow.

The reviews that are out so far seem to be quite positive overall and the review entities I tend to trust (Kotaku and Polygon, oh and Rockpapershotgun  is good, but they only talk about PC games) had mostly positive things to say. I am going to try and rent/check out from the library a copy of this soon for sure and look forward to booting it up on my Playstation 4. Oh, and if you have a Playstation 4 Pro you can enjoy even snazzier (apparently) graphics. Though if you already have a Playstation 4 you know my feelings about anyone going out and buying a Pro. So yeah, "The Last Guardian," is actually coming out. Now we just need, "Shenmue III," to be finished and, "Half-Life 3," to at least be announced and all the mythical games will have entered reality in some shape or form.
Posted by David Charles Bitterbaum at 10:39 PM