You Will Probably Disagree

I have an album of the year for 2016. There is a good chance you will disagree for a number of reasons. It became available for streaming in February of this year but then the creator kept tweaking it in ways that at times improved and at other times hurt the quality of his project. This altering of tracks introduced the idea of an album as a, "Living," thing that can keep being changed even after its release--an idea that ruffled as many feathers as it did inspire discussions. The artist also is often thought of as a loudmouth who thinks too much of himself. He also had a bit of a breakdown that people are rumoring may have been faked. So many people hate him and even I get sick of his behavior, but goddammit if you actually sit and listen to the stuff he puts out you might just have to admit the man is a genius. In case you're utterly dense, the man I'm talking about is Kanye West, and my album of the year is...

The Life of Pablo 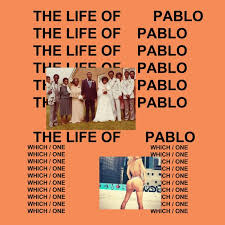 Unless you're a diehard fan of the guy, I bet you hate Kanye. I'll admit he is a hard guy to like--I'm giving him album of 2016 and I get really mad at him for the things he does. That said, just listen to the first track, "Ultralight Beam," or put on some, "No More Parties in L.A." and tell me he doesn't know how to produce, rap, and otherwise masterfully create some hot tracks. You think he's a full-of-himself jerk? I'll agree with that. However, you think he has no talent? Fuck you, he's a genius, just a genius who too often behaves abhorrently. Kanye even knows you're sick of him and liked him more when he was just the shy polo-wearing guy putting out, "The College Dropout," with everything to lose--he says as much on, "I Love Kanye," a quick music-lacking bit of verses that make it clear Kanye knows you hate him, and he doesn't care because he'll just keep creating pure sonic-gold.

"The Life of Pablo," isn't flawless--even the best album can have some clunkers of songs. That said, it is so powerful an album, so epic, so incredibly Kanye that I have to say now what I first said in a headline when I discussed the album back in February--"Fuck You, Kanye West is Still Awesome." It's now December and despite all his trials and tribulations, countless mistakes and gaffes, his otherwise often acting like an idiot, Kanye is still Kanye, and I love Kanye just like Kanye loves Kanye.
Posted by David Charles Bitterbaum at 8:51 AM

Email ThisBlogThis!Share to TwitterShare to FacebookShare to Pinterest
Labels: 2016 in Review, Kanye West, music, The Life of Pablo