Relaunch of 2016 That Surprisingly Didn't Suck: DC Rebirth--2016 In Review

It Shouldn't Have Worked, Yet it Did 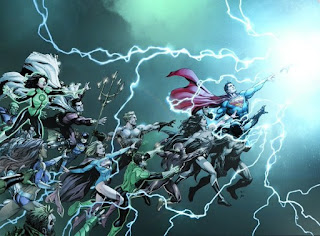 DC Rebirth shouldn't have worked when you look at the facts, and yet it did.  I mean, I thought they were going off the rails with this talk of incorporating, "Watchmen," into the books, sort-of undoing the latest reboot, and basically continuing to alter what is and isn't in-continuity that everyone is hopelessly confused. Then again, I did also ask if maybe, just maybe, it could work? I would think for the most part it has, as DC is getting a ton of market-share, released a number of books to rave reviews, and otherwise things are coming-up roses. I think it helps that some good creative talent is on the books and that DC used the broken continuity to its advantage as well.

What do I mean by that last statement? Well, basically, some of the characters in the DCU are starting to realize their continuity is hopelessly broken, with all these timelines and versions of them in existence (and memories starting to bleed together for some characters). In fact, maybe 10 years are missing of everyone's life with little explanation, and most of the Nu52 has been undone, with that forever now to be regarded as an opportunity for experimentation DC kinda blew. 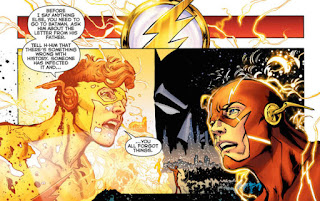 It seems like possibly Doctor Manhattan of, "Watchmen," is to blame for all this, which seems stupid but DC maybe, just maybe could get to work. If they are meta enough and cover how comics such as, "Watchmen," forever altered the field of super-hero comics, that could be cool. Basically the characters within the story of the DCU can cover how the stories of another world impacted them--some real Grant Morrison-style stuff.

Whatever DC chooses to do going forward with Rebirth, at least it has brought us some great books (like, "Deathstroke!") and otherwise been surprisingly good. The whole thing could still blow-up in our and DC's faces, but it is starting to look more and more like the company may finally be on a successful and smart track.
Posted by David Charles Bitterbaum at 9:48 PM