Thoughts On the Spider-Man Trailer and Harley Quinn Movie News

If you've been following the news about comic-related movies I'm pretty sure you've both seen the trailer for, "Spider-Man: Homecoming," and heard that there is going to a Harley Quinn-involving, "Gotham City Sirens," flick. Both pieces of news are interesting and have me cautiously optimistic while also taking into a possible, "Catch." Let's review
Spider-Man Homecoming and it's Trailer
Why I'm Cautiously Optimistic
Well first off, check out the trailer itself underneath the headline. I'll wait. Now then, as you can see the movie has found an awesome Peter Parker in the form of Tom Holland, it is eagerly incorporating the Marvel Cinematic Universe thanks to Sony's deal with Disney to share characters (they are chomping at the bit to have Robert Downey Junior AKA Iron Man appear), and Michael Keaton is always a joy to see onscreen whether he's a hero or a villain--here in the form of The Vulture (a villain I've always felt could be really cool if done right and am pleased to finally see appear on the silver-screen after a rumored false start years ago). We've got great casting, a plot that looks interesting, and again, Iron Man! It looks like a slam-dunk!
The Possible, "Catch"
Then again even when something looks like a slam dunk the rim and netting could always fall apart (if you'll excuse the clumsy metaphor). After all, this is the 3rd iteration of Spider-Man we've seen now, after the Tobey Maguire one fizzled out and the Andrew Garfield one was basically killed mid-story. This version has a lot more going for it thanks to the incorporation of the Marvel Cinematic Universe, but is the 3rd time a charm, or are audiences just going to be burned-out on Spidey at this point?
Also, by having the MCU play a role in this will that dilute Spider-Man and turn this film into more of a, "Iron Man and friends," kind of flick? That, or is Tony Stark just being played-up for the previews and will actually have just a small amount of screen-time, allowing the story of Spider-Man to breathe? Also, will this movie simply pick-up from after, "Civil War," or will we have to see the origin of Peter Parker's powers yet again? I ask because if I have to watch Uncle Ben die one more time I'm going to be really hot-pissed (and don't get me started on the countless number of deaths we've witnessed for Thomas and Martha Wayne)! Again, these are possibly gripes and worries that will turn out to be unfounded, but I just gotta have my concerns. Here's hoping the movie is as good as we're dreaming it will be.
"Gotham City Sirens," Movie 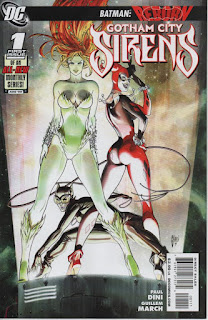 Why I'm Cautiously Optimistic
Many people loved Margot Robbie as, "Harley Quinn," so a movie with her and other female heroes/villains already has Ms. Robbie as one cast member that is guaranteed to do a good job. Plus, as it takes place in Gotham we doubtlessly will get some Batman and even people who were critical of Ben Affleck as Batman before, "Batman Vs Superman," now agree he was one of the best parts of the film. Also, we have not yet had a super-hero movies that features female leads. We've had super-teams that have a female or females on them, but films that puts the focus on a group of female protagonists is currently unseen. This creates a stellar opportunity for DC to make something special. It has some great source material, for sure.
The Possible, "Catch"
Seriously, have you seen the DC movies so far? I didn't hate, "Batman VS Superman," but it had a myriad of problems. I also haven't even bothered to see, "Suicide Squad," in full yet but from what I've heard it had numerous concerns as well. Hearing that David Ayer is going to direct this movie only is good news in the sense that means Zack Snyder isn't doing it. Also, I wonder if DC has agreed to give Ayer more creative-control over this movie than, "Suicide Squad," because that was plagued with rumors of creative conflicts. As  I mentioned, we have never had a movie focused on a female super-hero/villain team. I honestly hope DC doesn't royally shit the bed and create an impression that movies with female heroes don't sell when the real problem could very well be DC and the people it has chosen to helm its cinematic-Universe.
Great Things Ahead, Or Tough Times?
I see a lot of potential in the trailer for, "Spider-Man: Homecoming," and the opportunities are abundant for a quality, "Gotham City Sirens," production. Whether Spider-Man will manage to impress this coming July and/or the Sirens will be good whenever their movie comes out is a big question-mark, but as someone who generally prefers good movies over bad ones, I know I'm wishing both the creative teams the best. Also, all the fans into Harley and Poison Ivy having a relationship (as the comics confirmed) would go nuts if we actually see Robbie and whoever plays Ivy hook-up. Putting aside the questionable portrayals of bisexuality in film throughout history (bisexual people often are shown as deviant or, "Evil,") I'm betting folk wouldn't protest too much.
Posted by David Charles Bitterbaum at 3:27 PM