Weirdest Comic This Year--2016 in Review 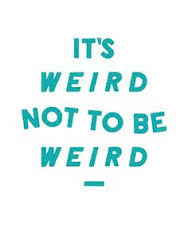 A comic can be bad and weird, or it can be good and weird. Weirdness is not a quality indicator, but Lord knows I enjoy it when a comic is both weird and an enjoyable weird. I am happy to say my selection for weirdest comic of 2016 is both startlingly bizarre and as delightful as it is fascinating. 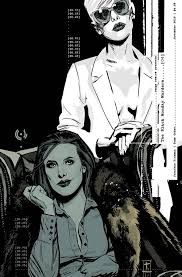 This is a comic where the issues come out in big $4.99 editions--but its okay because every issue is huge and packed with pages and pages of content. "The Black Monday Murders," is in essence about fiance and money--but it is really bout so much more. It's about control, family legacies, ancient evil forces, the concept of, "The Market," as a living-breathing creature almost, and it is full of in-universe documents such as police reports, journal entries, or ancient manuscripts that are interspersed with the comics and help fill-in some of the details of the world. Jonathan Hickman is a writer who often has grand ideas but struggles to make me care about the characters. He isn't having that problem here though, giving us a wide-ranging cast full of both people we root for and others we can only pray meet their end before inflicting much more harm to others.

Another element that makes the comic work wondrously is Tomm Coker's artwork. Whether he is doing harsh and scratchy lines within scenes of violence or cleanly illustrating sparkling skyscrapers that hide horrific secrets, Coker's illustrative style is always a treat and has served this book well with its eerie and uncomfortable look. Coker can make a police interview that turns supernatural just as exciting when everyone is talking as he does when violence and madness starts. Truly, Hickman and Coker are working in-sync to a degree rarely witnessed in comics. 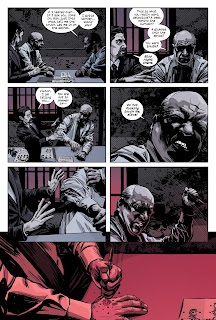 "The Black Monday Murders," is about so many things, as the said at the start, but in the end I suppose it is about one thing in particular: Power. If someone has power then arguably the money, control, legacies, and all that comes with it. In the world of, "The Black Monday Murders," however the market is itself seeming to be its own dangerous living concept, and one that could destroy everyone if they aren't careful. It's so incredibly weird, and I love it.
Posted by David Charles Bitterbaum at 6:51 PM