Television Tuesday: The Best Television Show This Year Was "American Crime Story" Beyond a Reasonable Doubt--2016 In Review

Frankly, I don't know if this series could have picked a better case to start with. I mean, the whole thing is really so over-the-top that if it were a fictional movie people might decree it is, "Too silly/absurd, to be at all believable." The wild thing is that this all happened (with dramatic flourishes for the show here-and-there) and even if everyone watching knows how the story ends that doesn't make it any less gripping. 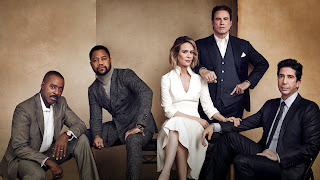 The best story in the world would suck if the story-teller is bad, but Ryan Murphy (of "Glee," and "American Horror Story" fame among other shows) manages to fight some of his worst impulses to be overly coy (occasional Kardashian-kids bits aside) in his direction and lets the amazing cast do a jaw-dropping job. Some of the actor-portrayals border on being a bit much (Travolta and Schwimmer), but I liked those roles plenty, even if Courtney B. Vance and Sarah Paulson mostly steal the show as Johnnie Cochran and Marcia Clark (and Cuba Gooding Jr. turns in a solid OJ Simpson as well).

To say, "American Crime Story: The People v. O.J. Simpson," is the best television program this year is a statement many will agree with, but due to so much quality programming existing that I did not watch, I'm sure plenty more folk would strongly disagree and state, "But about '________' show?" To such a claim I would say, I'm sure that program was stellar, but the 10 episodes we got for this show were so good I feel little could match it. Now I just worry if season 2 and whatever subject matter it tackles relating to Hurricane Katrina will be able to measure-up to how incredible this season was.
Posted by David Charles Bitterbaum at 12:00 PM