The Biggest Embarrassment of This Year is Huuuuge--2016 in Review

When I started planning-out these, "2016 in Review," posts I was originally going to award the biggest embarrassment of 2016 to Marvel comics for yet again having a series that was supposed to come out on a reasonable schedule ("Civil War II") and yet again screwing it up as they did with their last big event, the latest, "Secret Wars," that actually straggled into 2016 for its final issue. Comic delays are small potatoes to what I feel was the biggest embarrassment in the Nation for 2016, and which will make the United States most likely an embarrassment on the World-stage. I am of course talking about--and these are words I never thought I would actually have to say--our upcoming reign of terror brought to us by President Trump.

I honestly thought he would never truly run. Then I truly thought his campaign would fizzle-out before the primaries ended. After that I honestly, truly, 100%, without a doubt thought that Trump simply could not win the Presidential Election. I figured the American people could not be that horrifically ignorant, bigoted, and awful. I was wrong. I mean, I was kind of right about the American people because the Popular Vote AKA the majority of the population who voted (so yeah), wanted Hillary Clinton to win the Presidency. Instead, due to a centuries-old process known as the Electoral College which really today serves no purpose, Donald Trump is going to be elected our next..guh...excuse me, I vomited in my mouth a little--our next President. 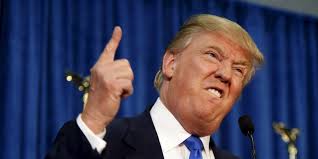 What cracks me up the most is all the people who thought Trump might lose were ready to protest, throw a fit, and otherwise bring us Round 2 of, "It's a sham, it's a sham, that person can't be President due to this list of conspiracy theories!" but now are all calm and saying how we need to, "Give Trump a chance, he is our President after all and deserving of respect." To them I quite calmly and politely say, "Fuck you. You insulted Obama for more than eight years, saying he was  Kenyan Muslim Terrorist who wasn't truly President. A man who had no horrific scandals, treated people with respect, and otherwise was a beacon of what we should think of when we picture someone Presidential. You replaced him with someone who said he's rich and successful enough to grab women by the pussy."

Trump is not even a decent human being and he somehow is going to be President because enough people voted against their interests for that of a Billionaire who could care less about them. The consequences of this election may very well be catastrophic (I won't say the world is literally going to end in an explosive war, but it seems more likely than ever). I have no clue what will happen to economy, social progress, or any of that. I won't stand idly by while LGBTQ people are picked-on, women are denied a right to control their body, and Muslims are potentially told to register on an ominous-sounding list. I won't be quiet, I will loudly protest and stand against this hatred, and hope you do too. I say this because Lord knows 2016 was tough, so we sure as Hell better be ready for whatever mayhem 2017 brings.
Posted by David Charles Bitterbaum at 7:00 PM