Not Everything Great Lasts, Especially in Comics 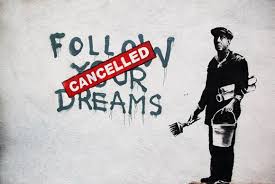 Let's start this year in review with a downer, because I'm like that! Anyways, this year Marvel and DC made all kinds of cool comics and while DC almost cancelled one before it's time ("The Omega Men,") they allowed it to run its initially planned-for whole 12 issues so that was more of a really good mini-series. Two books from Marvel were clearly ended before their time however, and besides how depressing it is when a truly good book in axed, these books starred a successful and skilled man of color in one and a kick-ass and progressive woman in the other. Considering how often titles seem to be a bunch of white guys that makes the cancellations sting just that little bit more. 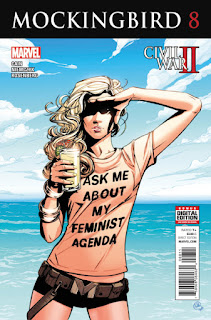 The most ironically hilarious thing about all this is Chelsea Cain's, "Mockingbird," comic got more attention for the cover of its last issue after it was cancelled than the rest of the super-awesome book ever did. Maybe if Marvel hadn't cancelled the book they could have turned all that press about the, "Feminist Agenda," shirt into bigger sales. For real, though, this book was zany and extremely creative. The first five issues were incredible in how the first issues encapsulated a number of weeks, and then issues #2, #3, and #4, all led back-up to the ending of #1 for the fifth issue and then reached a conclusion. Issues #6-#8 were delightful too, with the main character, Bobbi, going on a cruise for fans of various super-related hobbies.

"Mockingbird," took all the problems the character of Bobbi had experienced--a complicated relationship with Hawkeye, a weird back-story and generally strange continuity--and turned these problems into things that helped make the book even more odd and fun. The thing is, odd doesn't always sell, even if it is a great kind of odd (I'm amazed, "Unbeatable Squirrel Girl," has kept going). Therefore, this book got to eight issues and no ninth. Quite the shame. 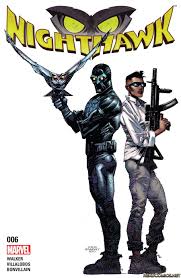 This book already had a lot of cards stacked against it--Hell, basically the whole deck. It was a book that featured a character many people consider a Batman knock-off, but with this version being from an alternate Universe readers saw in, "Supreme Power," and who was brought to the normal Marvel Universe during Secret Invasion--and this character also is kicking-around in, "Squadron Supreme." So, a less-liked character, a different version of him with tons of back-matter baggage, and he's in another book barely anybody has been reading. And yet, despite all these things going against, "Nighthawk," it was really, really good because it remembered some key things: Nighthawk is maybe a Batman knock-off, but he's a really pissed-off Batman imitator who doesn't hesitate to kill and has a political agenda.

The best comics to feature this version of Nighthawk in the past when he was part of the old Supreme Power Universe kept this in mind and presented him as less of a hero than a dangerous force of justice that you better pray is on your side (Daniel Way had a great take on this). This Nighthawk is named Kyle Rayner like the one in the original Marvel Universe, but he is very different. He is a black man who's parents were murdered by racists, he is fueled less by a sense of right-and-wrong than he is making those guilty of hurting others pay, and as I mentioned, he is very skilled and very dangerous. 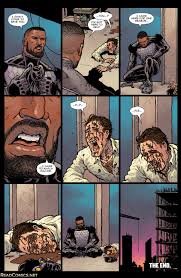 Nighthawk's comic had him going-up against an evil businessman who was trying to sow seeds of racial discord in Chicago through arming white supremacists and laughing all the way to the bank as the city tore itself apart. There also was a serial killer who killed a lot of the same people Nighthawk hated and was arguably a reflection of what Nighthawk had to avoid becoming. In some respects the last page of the series (shown above) sums-up everything about Nighthawk well. He stops the serial killer but does nothing to help the other bad-guy, instead watching him die. It isn't the, "Right," thing to do, but it is what Nighthawk thinks is just. It is dreary, depressing, and a pitch-perfect way to end things. Writer David Walker may have had his run truncated, but he still stuck the landing perfectly. Even if sometimes books we love end sooner than we feel they should. It sucks, but at least we can be grateful for the time we got to spend with and enjoy these comics, you know?
Posted by David Charles Bitterbaum at 12:01 AM