Reviews of Some DC Collections I Read Thanks to the Library

I Really do Love the Library 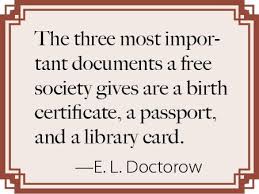 I've read some DC Comic Collections lately thanks to my library system carrying all the books I've heard are interesting but which I don't want to buy because my collection is getting too big for stuff that I might enjoy (plus I only have so much funds). I quit reading a lot of the DC books monthly before the latest, "Rebirth," re-launch but wanted to check some of the books out that I had either followed before dropping them (like, "Batman,") or which good things were being said about. With that established, here are some DC collections of comics I've read! 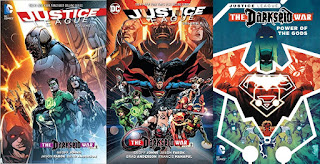 Yes, that last book's title  has a colon within a colon. It is odd, I know. Anyways, I mostly quit following the, "Justice League," comic after, "Forever Evil," and Lex Luthor figuring out how Bruce Wayne was Batman (not that impressive considering a kid, Tim Drake, has done it too, but whatever, I'll give Luthor the win). I guess that resulted in Luthor being allowed by Batman/blackmailing Batman onto the Justice League because here he is fighting against Darkseid and the Anti-Monitor AKA the secret bad-guy behind the villains of, "Forever Evil," fleeing their ruined home-world. Other heroes and villains pop-up such as Mister Miracle and a lady named Grail who is Wonder Woman's evil Amazon counterpart due to being born the same day (or something), but things don't actually get all that interesting until toward the end of Volume 7/Part 1 when a bunch of the Justice League members gain incredible powers in the process of killing Darkseid.

To name some changes: Batman finds his way onto the chair of Metron and gains near-infinite knowledge, the Flash gets the power of death (or something) and Superman seems to be basically the same in strength but now fully black-and-white in coloration and really pissed-off all the time. These alterations to our heroes is explored further in the double-colon, "Justice League: Darkseid War: Power of the Gods," which collects some one-shots that came out during the even chronicling what our heroes got up to during their time gifted with immense power although I only found the, "Batman," one particularly interesting with its focus on Batman causing a headache for the legal system due to his now capturing perpetrators because they can actually commit a crime. The Superman one wasn't too bad either with it hinting how even when vaguely-corrupted by the powers of Darkseid a hero like Superman has bits of humanity in him still. 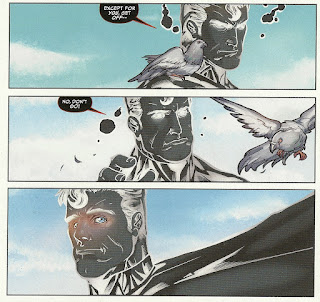 Once Volume 8/Part 2 kicks in since the climax of Darkseid's violent defeat the story gets moving a lot more as the Anti-Monitor tries to destroy Earth and Justice League has to team-up with the Crime Syndicate (the evil heroes from that, "Forever Evil," event) and release them from prison in order to fight the Anti-Monitor whilst fighting their own new powers that are making them act weird. Wonder Woman is one of the few heroes not corrupted so a lot of Volume 8 involves her viewpoint and thinking about how she's possibly the only person staying sane as the whole team falls apart--a nice touch as outside of her solo-comics we don't see much of Wonder Woman's viewpoint in regards to when she is in a team-book.

It was a little odd seeing the Anti-Monitor--a being who can destroy all of reality--just slowly destroying Earth considering his immense powers, but it is addressed how he is a bit weaker from his fight with Darkseid and in some ways likes having the more, "Personal," touch of evaporating a single planet as opposed to doing damage on a massive scale--a weak explanation, but an explanation nonetheless. Plus, compared to how weird and confusing things start to get toward the end of Volume 8/Part 2 that's nothing. You see, the Superwoman of the Crime Syndicate is pregnant, and gives birth to a baby, that somehow is morphed into a full-grown Darkseid who is controlled by Wonder Woman's aforementioned evil fellow Amazon, Grail. So we've got the Justice League dealing with corrupted powers, the Crime Syndicate reappearing, as well as extra villains and heroes from various planets resulting in the last few chapters of this volume being a bit of a jumble of a ton of characters struggling to get, "Screen-time." The Justice League of course overcomes evil and saves the day, but it is really messy considering how many characters and plot-lines are fighting for attention. Still, overall this was decently-entertaining even if it was heavily flawed, so I would rate it as....
3 out of 5 stars. 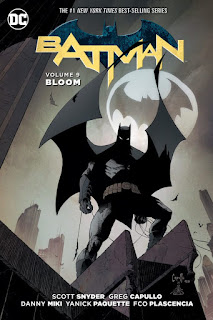 The conclusion of Scott Snyder's immense run on, "Batman," and I think the only Nu52 book that kept the same writer from beginning to when it ended for, "Rebirth," starting-up. A whole bunch of things happened over Snyder's run from the introduction of the Court of Owls, to repeated appearances by the Joker, the late-series introduction of this, "Bloom," baddie, and towards the end Bruce Wayne was, "Cured," of the trauma of being Batman and quit doing it long enough for Jim Gordon to step-in and tackle the job for a bit. Don't worry though, before that could stick for too long Snyder essentially resets almost everything as Bruce Wayne becomes Batman again and the only meaningful alteration is how a young man named Duke Thomas joins-up to become a new bird-themed sidekick (Lark).

Also, we never learn the true identity of who this, "Bloom," person is because I guess the concept is how anyone could be a terrifying monster or a hero? I dunno. At least some of the time we get awesome art by Greg Capullo who also was with this run from the start but had the occasional fill-in artist. Snyder and Capullo gave us a, "Batman," comic that was at times ingenious, at other times terrible, but overall was a pretty good time, kind of like this concluding book. Not too bad of stuff.
3.5 out of 5 stars.


The Omega Men: The End is Here 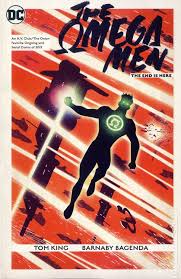 This book won all sorts of critical awards and through the sheer protest of fans alone was kept from being cancelled early when the creators had said it was planned as a 12-issue epic and DC threatened to truncate that. Happily it kept going and then once collected shot-up the New York Times best-seller list, so hooray for critical reception turning into commercial success for once too!

"Omega Men," takes place in the DC Universe but in many ways works to be its own removed entity, focusing on a solar-system that has purposely kept itself removed from the affairs of the Universe--even the galaxies-spanning Green Lantern Corps. However, lantern Kyle Rayner comes to try and negotiate peace between warring groups and then things just get really depressing. Essentially this is a comic about how sometimes no matter how hard we want there to be a happy medium or a positive solution, sometimes shit just ends up being awful. It is a message I'm not sure I fully agree with, but kudos to writer Tom King for giving us a comic that eerily-mirrors much of the drama befalling nations today with our whole, "War on terror," except the twist in this case is that the terrorists are actually the good guys, maybe? 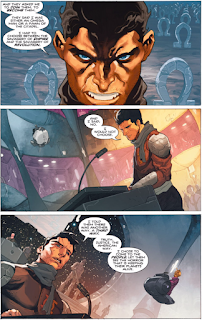 You see, even with the right-or-wrong ideas the comics covers, a whole lot of gray still exists and you as the reader are never sure exactly who to cheer for---the morality of everything is extremely murky. It is a really good read and one I would recommend you check-out via your library/borrowing from a friend/buying at a store or online. It's a fantastically good read.
5 out of  5 stars.

Thanks Again to the Library!

Thanks once more to my local county libraries! As a resident of Saint Louis County I actually can acquire a library card for the City libraries too (Saint Louis City counts as its own County), and have done so--some of the stuff I read for my post about manga was actually from the city. I plan to read more books via those libraries too and in the future bet I will be thanking both the County and City profusely as I keep making posts about the stuff I've read!
Posted by David Charles Bitterbaum at 2:08 PM