Television Tuesday On A Monday: Dave Chappelle Was Exactly What Saturday Night Live Needed This Weekend 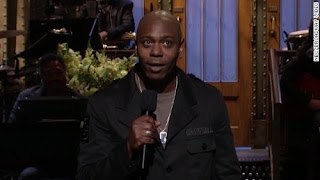 Dave Chappelle had an amazingly popular comedy central program, "Chappelle's Show," which he startled everyone by walking away from back in 2005 when he felt the messages he was trying to impart were being missed by way too many people. Chappelle arguably left his incredibly popular show because he feared that instead of mocking racism he was in fact promoting it, basically. After that he did the occasional movie or stand-up act, but mostly has been under the radar for 10+ years. Then came November 12th, 2016, and it was so good I could not wait until it was officially Tuesday to post about it.

Last Saturday Dave Chappelle arguably performed his first return to prime-time since leaving his show and hosted one of the best episodes of, "Saturday Night Live," in quite awhile. SNL is of course a program I have written about on multiple occasions, and one which often will stumble (Trump hosting in 2015 is a scar that will probably never heal) or have periods of dreariness. Howver, I stick with the show because episodes like the one we just had last weekend are a prime example of why I never give-up on the program. The opening with Hillary Clinton singing the recently-passed Leonard Cohen's, "Hallelujah," was a bit odd, but it led right into an amazing monologue by Dave Chappelle. Before I discuss it you should watch it first, here is a video-link:

Damn, just damn. That is exactly what many people needed to hear after the dreadful week of Donald Trump winning the Presidency (shudder). Chappelle spoke earnestly, bluntly, and expressed hope but also kept us in the realm of reality. It was honest, frank, and the story at the end of his monologue about the history of the White House was touching. The fact that the rest of the episode was stellar too, between Dave actually bringing back some of his characters from, "Chappelle's Show," for a clip themed as, "The Walking Dead," surprise appearances from multiple folk (including Chris Rock!), and a bit that was delightfully meta in its humor (the hair-filled restaurant skit that bombs terribly but then is revealed to have been purposely bad for a post-skit interview segment), this was an astonishing episode of the long-running program (40 years now and counting).

After how I was feeling during the week post-election, seeing this episode of, "Saturday Night Live," was just what I needed--laughter, a much needed dose of hope, and encouragement to stand-up for what I believe in as things will only be getting tougher soon.
Posted by David Charles Bitterbaum at 1:35 PM