David's Reading Manga?
Okay, let's put aside any misery related to the election and discuss something more fun, like...manga?Yes, manga--which I know I've discussed in the past as something I don't seem to always really be especially into outside of a handful of select titles. I wanted to see if maybe I just haven't found stuff that really, "Grabs," me and from finding various recommendations on the internet, in podcasts, or thanks to various people I spoke with, there are some books I picked-up from the library (both county and city), borrowed from someone, or purchased that I have read and will now review! 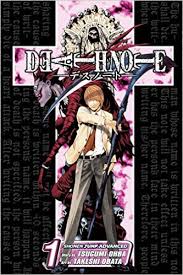 Death Note Volume 1
This wasn't bad at all! It is a really quirky book about a demon that gets so bored it drops a notebook to Earth that will kill anyone who has their name written in it. Little does the demon suspect that a High-School student named Light who picks-up the book is a genius who instead of using the book to kill of people like bullies (as a normal story might go) decides he wants to become a God of sorts and starts killing-off criminals in the hopes people will behave more. It is a weird swerve in the story and compliments the off-kilter vibe of the book. It'll have quiet and realistic moments and then suddenly introduce us to a mysterious detective named simply, "L," who is used by Interpol for impossible cases such as the one Light has caused (because when criminals suddenly start dropping dead of unexplained heart attacks it causes a panic). The story stays interesting though in how Light appears to always be at least one step ahead of anyone investigating him.

My favorite moment in the book was probably when the Demon tells Light he didn't actually, "Choose," him. Light just happened to find the, "Death Note," and turned out to be the perfect person to use it with his mixture of intelligence, cruelty, and being enough of a narcissist he wants to rule over a theoretical peaceful world he has forced into existence. That's the crux of it all, Light isn't some special choice, he just got lucky, and it seems deep down that irritates him a bit and is one of the driving forces behind his actions. I've read that while the manga is quite enjoyable earlier-on sometimes people get a big tired of it after various twists and turns in later volumes. Whether that will occur for me remains to be seen, but as of right now I found this first volume pretty fun.
3 out of 5 stars. 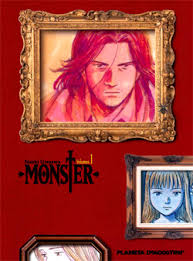 Monster Volume 1
I quite liked this manga as well, arguably even more than, "Death Note." This is a big honkin' book at more than 400 pages but as with a lot of manga I've tried I find it reads pretty quick--especially when a story grabs my attention. This book details a doctor named Kenzo Tenma who saves the life of a young boy when he and his sister (who is in shock) appear to have their parents murdered and the boy is shot in the head. As this first volume proceeds however it becomes apparent the little boy was a dangerous killer and now has grown into one of the worst sociopaths ever...all thanks to Dr. Tenma saving his life those years ago. This volume sets-up much of this plot and then brings the reader some brutally violent climaxes about 3/4 of the way through before then starting to set-up what is bound to be some more interesting volumes of Dr. Tenma trying to kill what is arguably his own Frankenstein's Monster--although wait, the kid was already awful before the doctor saved his life, so that metaphor kinda falls apart.

I looked on Google and apparently I'm not alone in really liking this manga, with it having won numerous awards and having had adaptations made of the comic. Author Naoki Urasawa has made a stellar book here and I'm excited to check out the 2nd volume. Between, "Death Note," and this  book maybe I'm finding out I actually really do enjoy manga, I just need the right kind of story!
4 out of 5 stars. 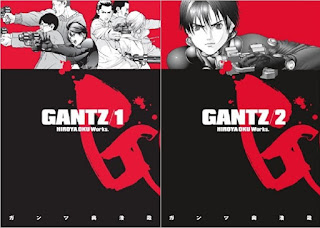 Gantz Volume 1 and Volume 2
If, "Monster," was the right kind of story for me, this is...well, it isn't the, "Wrong," story, but it definitely is a different and quite odd kind of story. Whereas, "Death Note," is a bit of an adolescent power-fantasy and, "Monster," is a suspenseful murder-mystery, this is a lot of over-the-top violence and nudity--so yeah, that kind of story.  Created by Hiroya Oku, this first volume introduces us to the basic concept of how people who have seemingly died are in fact still alive (maybe?) and have to follow the orders of a strange black orb--orders which consist of going off and killing folk. I read-up on the overall plot of the series (as I am the kind of horrific human who often doesn't mind spoilers/spoiling themselves in regards to a story) and have learned there is a bit of a riff on video-games with much of the story, as the protagonists under the control of the black orb/Gantz earn, "Points," for fighting aliens disguised as humans and if they fight/play well enough can resurrect teammates--"Players," are even stuck in a certain area/arena of sorts until all the enemies are eliminated. After that, everyone gets to go home and live a normal life until they are summoned by Gantz again.

It's a bit of a clever concept and while these first two volumes barely scratch the surface of all that, I still was moderately entertained by all the proceedings--after all, sometimes you just want to enjoy some absurdly-violent silly action and nudity (hence my saying this isn't the, "Wrong," kind of story for me, but a weird one for sure). I'm interested enough in what's going on to at least find a way to pick-up and read volume 3.
3.5 out of 5 stars. 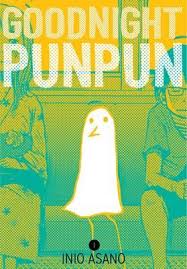 Goodnight Punpun Volume 1
This is one of the weirdest stories I've ever read, so congrats to author Inio Asano, I think? Please note, I am not saying the weirdest manga, just most bizarre and outright demented yarn I've seen told in some time (I'm not alone in feeling this). Basically following the life of a kid named Punpun who lives in Japan, the thing about the story is that everyone around him is a little...off. Punpun is purposely drawn in a minimalist style which stands in an intriguing stark contrast to the hyper-detailed drawings of people and photos of locations around him (besides his family who are also drawn the same). The people, as I mentioned are all strange. Whether this is the school Principal who plays, "Hide and seek," with other staff, his friends who obsesses over a God made out of poop, or the girl he has a crush on who seems sweet but also threatens to kill him if he ever crosses her, Punpun's life is sort of weird--and that's before we even get to how his home-life is pretty much a mess.

It seems Punpun's father may have a drinking and violence problem as the story makes it clear early on he gets arrested and can't be near the house or Punpun's Mother who has a mysterious injury befall her. This results in the brother of Punpun's Mother moving in and besides being a huge angry cynic he seems to be the only person in Punpun's life who isn't messed-up. Punpun sometimes tries to talk to God about all this, and God is a smiling man with an afro who seems more interested in belittling Punpun than helping him with anything. As I said, it is all very, very weird. It is sad because Punpun really does clearly want to live a normal life, but even supposedly regular things he does turn weird. He and his friends find a porno-tape and are excited to watch it, but when they start viewing it the, "Action," suddenly cuts out to reveal someone taped a murder confession over the movie that may or may not be a hoax. The whole first volume of this collection is that way--normal things just go screwy. 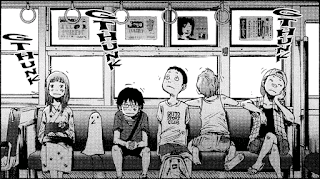 I make this all sound very tragic, and while things are pretty depressing, this is also a pretty funny book. There is a lot of comedy in the sadness and while the book can at times be a really dark comedy, it still can be quite hilarious at the same time it is horrifically sad. I loved this initial volume of, "Goodnight Punpun," and am for sure going to seek-out future editions which have already been translated and released along with upcoming volumes.
5 out of 5 stars.

Good Stories, Hooray!
Well what do you know, I apparently do like manga, I just had to find the kind of comics that appealed to me. I read some good books and some great books, having found a number of titles I definitely would be interested in reading more of without a doubt. I look forward to reading more manga and know that while there will doubtlessly be stories I stumble upon that I don't enjoy, there is some fantastic stuff out there as well.
Posted by David Charles Bitterbaum at 10:15 AM