I saw an article on Bleedingcool a bit over a week ago about how bundles of comics had, "Retailers in a Tizzy," which is actually a really good headline in my opinion as someone who loves the word, "Tizzy." You see, apparently at Walmart (and other stores) a shopper can find bundles of comics from Marvel, DC, and other publishers. The comics apparently are just random issues and probably come from a huge chunk of back-stock bought by some distributor or another who then has the stuff sold at big stores. I haven't seen these comic bundles at Walmart myself, but I was actually at a Five Below near my house and stumbled upon them.  Here are some pictures of the front and back of three various packs: 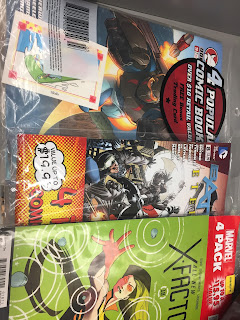 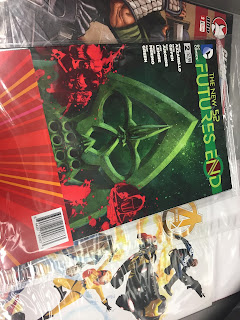 The DC ones all seemed to have a lot of random, "Batman Eternal," issues and, "Future's End," stuff. There were a number of bundles that had Marvel comics of a wide-range, from recent-ish Avengers and X-Men stuff to that, "All-New X-Factor," pictured and other books that seemed to be put in a bundle with little rhyme or reason. The only pack that really made any sense tonally/thematically was the pack of G.I. Joe comics from Devil's Due which again were all random issues, but came with a free trading card and at least all were the same series--although it has been years since Devil's Due owned the G.I. Joe license (that went over to IDW before Devil's Due went out of business and then came back slightly changed and post-merge with, "F1rst Comic,") so someone was really digging in the back-issues to make these packs, I think. Five Below realized even with a trading card these comics would have less appeal as the, "G.I. Joe," books were only about 2 bucks and the Marvel and DC ones were 4 smackers. I think all the books were marked-down from an initial retail price of $5.00 a pack as well.

Now then, getting four comics for under five dollars is a seemingly great deal. However, these four comics are utterly random and I feel like these are meant more as gifts for kids/teens/adults like me from relatives who hear, "Oh, they like comics," and then see this bundle and go, "Ah, this'll work," because seriously, how is anyone who can read as opposed to just looking at the pictures going to have any enjoyment of and clue about what's going on in, "Batman: Eternal #8," if they haven't checked-out issues #1-#7? I understand some direct-market comic retailers are perturbed about these books, but I don't think they are really competition for you all.  These are stocking-stuffers/filler items for clueless gift-givers who just see, "Marvel bundle," and remember that Timmy/Tabitha really likes those Avengers and X-Men movies.

The one area I can see a reasonable grievance is that plenty of stores bought these books from the publishers and now are attempting to move the back-issues in their own shops with these bundles clearly competing (and sometimes stores will even make their own bundles of series). That said, I don't think the people who usually check the back-issue bins also will be taking their chance on a mystery bundle at Walmart/Five Below/etc. in the hopes it has the one comic they're looking for. After all, these bundles contain four comics and you can only see two due to how everything is sealed. This isn't true competition to the comic-shops, and they really shouldn't be as worried as they are--at least that is how I feel after giving these bundles a gander. That said, I might go back to Five Below and grab at least one or two of those, "G.I. Joe," bundles because I heard the old Devil's Due books were pretty decent, and I get that free trading card all for 2 smackers.

In closing, I get why stores are annoyed. I just don't think the imagined worst-case scenario of someone buying bundles instead of visiting their store will occur--these bundles appeal to a much different demographic of buyer. That said, perhaps the best-case scenario could occur where someone is given this bundle as a gift and then goes to a store to seek out the other issues of a comic! Yeah, it is a little far-fetched, I know, but I'm trying to be optimistic here. Anyways, everyone just needs to calm down about these comic-bundles. I strongly believe this shouldn't cut into the business for comic-stores much, so let's all just chill.
Posted by David Charles Bitterbaum at 2:11 PM