Best Mini or Maxi-Series--2016 in Review

A mini-series generally is six issues, and a maxi-series is twelve. These rules can be played fast-and-loose with pretty easily though because I've seen plenty of mini and maxi-series that are much shorter or longer. What you would call an 11-issue series I am unsure, as that is a really long mini or a slightly-short maxi, I guess. Anyways, the book I consider the best limited-time run was initially solicited as ongoing, but then the writer, Tom King, was signed by DC to work exclusively for them. We was allowed to finish other projects however, and stated that he had pictured this one going for 12 issues--a nice little maxi-series. It was already one of my, "Weirdest comics," of 2015 when it had just started and now that it has finished here at the end of 2016 it clearly isn't just weird, it is wonderful and amazing. What is the series, you ask? 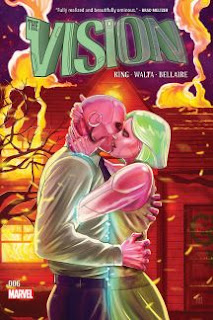 I already have said how the 11th issue was one of my favorite single issues of the year, and I mentioned that #1 and #2 came out in 2015, but the majority of the series was released in 2016 and that amazing 11th issue was also part of an overall fascinating whole. Through his taking pieces of past stories but not requiring readers to have much of any familiarity with Vision writer Tom King brings us something new and self-contained but also unquestionably linked to the main Marvel Universe at large. The artist on the (majority) of the comic's run, Gabriel Hernandez Walta also masterfully illustrates the proceedings, with an eerie calmness permeating much of the book before the later issues bring with them a great degree of disturbances and violence. A comic about a synthezoid struggling to try to be human showed us just how tragically human we can all be for the people we love--in this case Vision's family he created in a dream of a truly, "Normal life."

If there is any real downside to the book it would be that as it does exist in the general Marvel Universe nothing too big can happen, because at the end of the day The Vision still needs to be on the team with the Avengers, and even if some characters die how about we let another writer throw his daughter, Viv, into a team book and start drastically re-writing her personality? It's sad to think Tom King made something so amazing, but because of the laws of commerce his creation then gets exploited for anything usable now that he's left Marvel and has little-to-no say over what they do with his story going forward. Some people said how this comic was a bit like, "Watchmen," for a variety of reasons. It definitely is like, "Watchmen," in that Marvel couldn't wait to start picking its original ideas clean so to incorporate it into recycled concepts--so come see Viv join the latest iteration of The Champions! This time they're all teens! At least we got these stellar 12 issues.
Posted by David Charles Bitterbaum at 3:00 PM