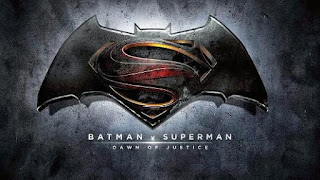 So it's Easter and everyone is talking about a controversial return from the dead. No, not Jesus, DC and their big, "Rebirth," they've got going on now that the New 52 has kinda-sorta failed. I haven't had the time to properly consider all that so I shall pass on talking about it for now, but I will eagerly discuss the other big thing that DC has got going on. The other big thing is of course the release of their big, "Batman VS Superman," movie, which despite middling reviews did sell its tickets like hotcakes, so DC and parent company Warner Brothers are probably breathing a big sigh of relief. As to my opinion about the general quality of the movie....

I Didn't Hate it, but I also Didn't Love it
I liked, "Batman VS Superman," but  I did not love it, Again, I was not overly impressed by it, but I did like it. I just want to emphasize that as some people have apparently absolutely hated this film. As for me, I find it takes the DC mythos and alters it ways that are interesting--Wonder Woman is cool--and also in ways that are dumb (so now we've got a Batman that kills? Okay then). A lot of time is spent building-up the fight between Batman and Superman that ends up being less impressive than it is two men punching each other a bit before realizing there is a bigger threat (I would say that's a spoiler, but the freaking trailers showed-off Doomsday, so don't get mad at me).

Speaking of the plot and fighting, some of the story beats just don't make sense, and some subplots drag on forever while others are quickly breezed over. One other annoyance? The movie is overly reliant on dream-sequences, with there being by my count at least 4 that occur, with one being an annoying, dream-within-a-dream. Oh, and Henry Cavill's Superman really is stiff and lifeless, much like in, "Man of Steel."
That all sounds quite critical, but there were elements to the movie I greatly enjoyed, such as most of the actors. Ben Affleck's Batman is delightful in his mixture of Bruce Wayne charisma and vigilante-rage, Gal Gadot makes a stellar Wonder Woman, Jeremy Irons gets in some great quips as Alfred, and Jesse Eisenberg's Lex Luthor was probably my favorite character. There was a lot of concern about if Eisenberg would do a good job, but his evil-hipster-genius Luthor absolutely is modernized version of the classic baddie that excels. The special-effects are incredible too and one plot element that I found interesting was how the start of the movie showed the big fight from the previous flick ("Man of Steel") at a ground-level perspective, really getting across the fear and shock at us mere mortals watching these god-like figures fight above.

Some of the thematic elements work well too, with the treatment of Superman as a God-like figure by some being an interesting concept that sadly is only minimally explored at the start of the movie before it switches its focus to Batman and Superman making threats at each other before engaging in fisticuffs. I was sad there really wasn't as much of Wonder Woman as I expected and this movie very clearly is setting-up future flicks--sometimes so obviously it is borderline obscene. We have one character who literally stares at video-clips of the other heroes we will see in future, "Justice League," movies, almost as if we the viewer were watching preview-clips online too.
Taken on its terms as simply being a fun movie, "Batman VS Superman," is clearly enjoyable despite its flaws. The issue is that many people have spent years of their life mentally building up a movie about these characters that the final product could never, ever live up to. Plus, it doesn't help that the final product is merely good as opposed to great--people could maybe excuse a movie that isn't the second coming of Jesus (I'm really tying-in Easter today!), if it was still amazing, but to have the thing you loved turned into a product that is just a pleasant use of 2+ hours? Yeah, that's gonna cause some anger, hence the low-to-mediocre reviews, I would figure. As I said though, this is still a good movie, and one that is worth watching, just keep your expectations at a reasonable level.

"Batman VS Superman," is a good movie. It has a number of problems, but also a good chunk of stuff that I liked. It wasn't amazing, but I had fun. The foundation set by this movie gives DC and Warner Brothers a solid amount of material to build off of, so hopefully the future flicks in this continuity won't just be good, but will actually be great.  This though? It's fine, if not amazing.
3 out of 5 stars.
Posted by David Charles Bitterbaum at 2:42 PM