Because I am someone who is always looking for something interesting to write about, and someone who enjoys watching television or surfing the interweb, I have of course seen the advertisements for daily fantasy sports. Also, on the rare occasion I frequent a sporting event (for my idea of being athletic is running when something is chasing me) I've found stadiums absolutely saturated in ads for--you guessed it--daily fantasy sports. All these print, digital, video, and audio ads led to me eventually asking one very important question:

What in the Hell are daily fantasy sports?

Well, there are fantasy leagues where a bunch of friends get together, picks players from different teams to draft their own imaginary, "League," of sorts and depending on how the player does that season they gain or lose, "Points," with some players ending up on top and others failing horribly. This involves looking at the odds, considering how well a player might do based on your own studying, and then drafting a team. With daily fantasy sports you do the same thing with players, but your team only exists for that day before you start fresh. You might think it kind of sounds like poker, with you having a hand, determining your odds, and acting accordingly, but this is nothing like poker, because fantasy sports--including daily fantasy sports--are a game of skill, a point that those behind daily fantasy sports are eager to state.

Skill Vs Luck Vs Logic 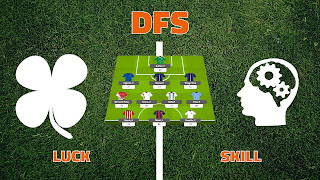 What's that? You're saying that poker is a game of skill too that involves a degree of luck in the same manner of fantasy sports? Well, I can't hear you if that's what you're saying because this print-out of  the, "Unlawful Internet Gambling and Enforcement Act of 2006," I'm using as ear-muffs makes for great insulation with its clause that a game of fantasy sports, "...has an outcome that reflects the relative knowledge of the participants, or their skill at physical reaction or physical manipulation (but not chance), and, in the case of a fantasy or simulation sports game, has an outcome that is determined predominantly by accumulated statistical results of sporting events," so suck on that, people who point out that realistically games of skill also involve a degree of chance too....because um, you're wrong?

Anyways, when it comes to playing DFS, as they are called for short, different games have their own setups. For example, if you were doing fantasy hockey (on the website Fanduel, I know it varies a bit by sites) you select two left-wingers, two right-wingers, two centers, two defensemen, and a goalie. Each player has a cost and you have a set, "Salary," you need to keep at or under budget in order to make a usable team--so no, you can't just stack your team with only star-players. Also, you can only have so many people from the same team (about 4) in your own fantasy-league for any sport. Once you've made a team and the game begins you're unable to change anything else and its all up to luck your skill at choosing to determine who wins.

Depending on the sport, websites have different ways of awarding and subtracting points. Let's say your player score as goal/touchdown/basket, that's some points there! Perhaps your player has the football intercepted/a score on their goal, that's points deducted. It is a bit like a video-game you're simply spectating as you watch your little ticker move around on the board to either making you a profit or losing your money. Odds are you will lose your money, just warning you.

End Results
Once the end of all the games is reached and the scores are finalized everyone sees the points they have and winners and losers are declared accordingly. Should you have played in a big tournament you might have placed in the higher-ranks and won some good money, or perhaps you did 50-50 contests where as long as you've scored higher than 50% of the entrants you double your money. Of course, maybe you just picked a really sucky group and came in dead-last, which is in and of itself kind of an accomplishment (except you don't win anything for that, so you're just shit outta' luck). Whatever the results are, that's your daily fantasy game, so pat yourself on the back, collect your winnings (or lick your wounds) and get ready to come back tomorrow or whenever the next games are held to do it all over again.

That's a break-down of daily fantasy sports, but in order to truly understand them one should take part, so in my next post I'll discuss my own experiences fiddling with DFS and how it went.
Posted by David Charles Bitterbaum at 12:23 PM