I've Got Just One Thing to Say 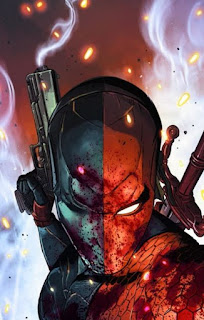 I had just one quick thought on DC and their rebirth that I wanted to share. Namely, that the only book I actually am interested in enough this moment to go and buy when it comes out is--of all things--"Deathstroke," because they got Christopher Priest (Christoper Priest!) to write it. 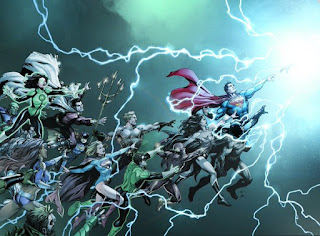 Fine, I lied, as soon as I typed that single quick thought a bunch of other things occurred to me, and only one of them is particularly positive. The other optimistic thought was that Tom King is a great writer, and now that he is exclusive to DC, if I want to enjoy his writing I will need to maybe try out the new, "Batman," book, which hopefully will succeed under his pen. Besides that, there is the consideration that DC has indeed utterly lost its mind, but this maybe, just maybe could work. I'm starting to think it might go horribly wrong however.

I mean, when your company embarks on a big relaunch in 2011 and then  Editor-In-Chief Dan Didio calls it, "Losing our way," a bit later that kind of reads as a slap in the face to everyone who made or bought your books for the past five years. True, the whole thing spiraled out of control to the point I was reading basically zero DC books, but to think you're going to get me reading one now (again, yah Christopher Priest) thanks to another gigantic overhaul ain't that impressive, ya dig?

When your amazing, earth-shattering, "We're destroying it all and building it back up!" re-launch seems to occur every five or ten years it quits being impressive and becomes more of a nightmarish hassle than anything else. I mean, seriously DC, the idea of, "Legacy," plays a role in your re-launch? That's hilarious considering that you wiped the slate clean five years ago, and to this day people still aren't quite sure what did and didn't, "Happen," from the old continuity within the Nu52.

You can't sell me on the idea that you're sorry for this little experiment, because you're the one who said the past was all outdated, lame, and otherwise not working as recently as 2011. However, suddenly now you're proud of your legacy and want to reincorporate that whilst keeping the small number of things that worked in the Nu52 (Scott Snyder is now DC exclusive, Harley Quinn will still have her own comic)? Nuh-uh, that ain't how this works. You can't have one kind of ice cream, toss it all out in the garbage saying its terrible, buy a new brand with some similar ingredients, decide it isn't working for you, and then go back to the old ice cream while declaring how you're excited to honor your years spent enjoying the first one before that awkward half-decade where you treated it like trash. 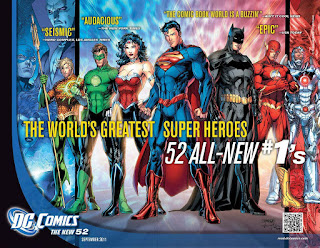 Another metaphor: If DC were able to have a physical romance with its publishing line, it would be the definition of an abusive relationship, "I love you; I hate you and found someone new who is a younger and hipper version of you; I can't stand the new person, please let me come back even though I attempted to bury you deep and forget you ever existed," and us readers are the uncomfortable witnesses to this conversation at dinner, sitting there awkwardly knowing that no matter how ugly it gets between DC and its comics we're going to be expected to pick up the check while they go have sweaty rage-sex in the car outside the restaurant...or something, this metaphor kind of went off the rails but you get my point.

It is possible that re-launching yet again and incorporating more of the past could work for DC. It is also possible taking a big chunk of their books to a schedule of coming out every-other-week could suceed too. Hell, it even is just maybe possible DC won't feel the urge to chuck everything that's occurred out the window in 2021 and start fresh yet again. I'm not sure, but dear  God am I annoyed, and this quick little thought morphed into one big angry essay. 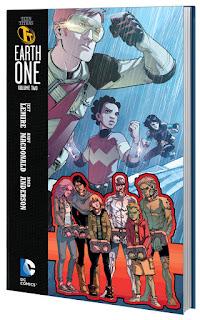 "Ugh, and sigh," is a good way to summarize all I just said. At least we get a new comic written by Christopher Priest and some, "Batman," by Tom King out of this whole fiasco, right? Oh, and it isn't related to, "Rebirth," but there is finally going to be a season 2 of, "Teen Titans: Earth One." That makes me less crabby.
Posted by David Charles Bitterbaum at 8:50 PM