A Review of Secret Wars (The Most Recent One)

There of course was a, "Secret Wars," comic some decades ago. I haven't read that one (I did long ago check-out that Bendis-written event that referenced the name though, it was so-so), but I did just recently read and mostly enjoy the, "Secret Wars," comic that ran during 2015....and into 2016, embarrassingly. It was a good comic, with some things I liked  even if there was some problems. Time to break it all down!

Let's Start With the Biggest Problem AKA Confusion Reigns
Without some background knowledge readers of this comic will be horribly confused  at the start, and even more-so when the comic shifts its focus early on to a place called, "Battleworld." It is essentially mandatory that you've at least read the, "Avengers," and, "New Avengers," issues Jonathan Hickman had going before this event, as they tie in with this so directly people who didn't read those or a background-primer will be utterly lost. Otherwise you'll be asking why Namor (of the "main" 616 Universe) and some other villains are in the Ultimate Universe, what all this, "Beyonder," talk is about, why one of the Reed Richards is evil, and so forth. Now, I said you need to have at least read those Avengers-related comics, but quite frankly it also would help to have read some or all of Hickman's, "Fantastic Four," run, a number of Ultimate-Universe comics--for example, Hickman's books set in the Ultimate Universe, "Ultimate End," and especially the comics that involve Miles Morales)--that, "Spider-Men," event where the 616-Universe Peter Parker met Miles, and you know what, this reading list helps you get a good idea of what you need to read.

However, should you really want to understand what is going on in Battleworld, the tie-ins that occurred with, "Secret Wars," and which took place in versions of various realities from past Marvel-comics, you would need to read everything from, "House of M," to, "Planet Hulk," to, "Marvel Zombies," to...screw it, here's another list that details the pocket-worlds and helps explain somewhat where they draw from.
You may be asking why all this reading is necessary, and there is an answer that is cynical and one that is more optimistic. The cynical answer is that Marvel wants you to spend all your money to buy every one of the comics that relate to, "Secret Wars," in the slightest. The optimistic answer is that writer Jonathan Hickman has always been a fan of making huge epic stories full of complicated elements best expressed in those flow-charts he likes to make, and therefore of course he would incorporate all of his Marvel stories from the start, other stories stretching back decades, and whatever else he feels like tossing-in to make his gigantic story. I've written all these thoughts so far but not yet actually told you the general story, have I? Let's correct that.

A Clever Story
It is admittedly quite a clever story.  Basically in the first issue the destruction of the universe that Hickman has been teasing for years actually occurs. "Everything dies," just as he said way-back-when in his earlier comics. Yet then we open in a new reality, ruled over by the living-God Doctor Doom who is assisted by his Sheriff/2nd-in-command, Stephen Strange. Suddenly the Universe is this patchwork of zones separated by borders that few denizens of one world are allowed to cross into the other. This world has a police force of Thors, kingdoms that are full of mutants in one place and robots in the other; realms that are familiar to the earlier-mentioned Marvel events yet still a bit different.

Oh, and absolutely no one seems to recall what came before until we learn that Doom and Strange do remember, they think they are quite possibly the last survivors of the past, and that when Doom was able to destroy the Beyonders despite their amazing power it was he who didn't shy away from taking their power and becoming a God (unlike Stephen Strange who utterly freaked-out at the responsibility), and single-handedly remade the world. Basically, it took the Universe ending for Doom to get his wish--to be the ruler over everything he always felt he was best qualified to be. 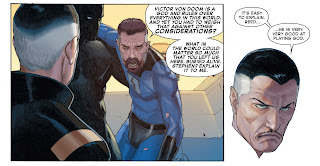 Some heroes and villains survived the world ending in their, "Life rafts," however, and are understandably aghast at this new Universe. In one of my favorite moments from this event Stephen explains why he has actually been pretty much cool with everything, stating how, "He [Doom] is very good at playing God." These hold-overs from the previous world lead to a whole bunch of trouble for Doom and the rest of the event basically follows everyone trying to best figure out how to take him down. It is at this point it feels really apparent the mini-series are useful reading, as at times certain characters seems to shift their allegiances with only minor explanation, and I imagine related mini-series, "Fill in the blanks," more as it were--for example: Doom's police-force of Thor's discuss how a Thor from the previous world has convinced them to fight against Doom, but we don't actually see this Thor ever telling them anything, it is just implied another comic will help us understand it all better.

I've gone all this time without talking about Esad Ribic and the stellar artwork he provides, and I apologize for that. His immense talent allows him to draw epic fights or everyone standing around talking with the same intensity and gravitas that it always maintains a satisfying visual narrative for the reader. His Doctor Doom (once Doom achieves God-status) is drawn with his metal outfit and a stunning stark-white robe. This Doom is one who won't suffer challengers much like the Doom of the previous Universe, but this one has the power to back-up any problems he has to face. Much like Doom all the other heroes are portrayed in an impressive fashion, be it a newly Phoenix-powered Cyclops, A gigantic version of The Thing stomping across the country-side, or Black Panther wielding the Infinity Gauntlet in hopes of causing Doom's power to waver.

Ribic's style has always been one I liked, carrying with it a feeling of intensity and specificity that compliments this story well, as lord knows Hickman needs someone with an attention to detail for all the various worlds and characters who play a role in this event. This series of course suffered some awful delays to the point that the big re-launch of the Marvel Universe had to occur before this series even ended. The end result of Ribic's finished artwork running throughout the whole event however is awesome, even if the shame of the delay hangs over Marvel's head.

Solid Entertainment
While Marvel may have gone kind of crazy with all the tie-ins that required an encyclopedic knowledge of the Marvel Universe, and a main event that required a not quite as big but still significant amount of understanding of recent marvel comics, I would say that, "Secret Wars," is definitely some solid entertainment. Between a story that is quite clever and visuals that seriously please, "Secret Wars," is by no means perfection, but it is a great piece of entertainment without a doubt. I would for sure recommend you read it, just maybe prepare yourself for a whole lot of background reading beforehand so you aren't utterly lost upon cracking open the book.
4 out of 5 stars.
Posted by David Charles Bitterbaum at 11:10 PM