The "Madballs" Comic--Review of the New Series

Back in the 1980's there was a popular toy/ball/fascinating and hideous fad known as, "Madballs."A funny collectible, they actually had a multi-media impact, appearing in cartoons, comic books, and otherwise filling the market with their trademark ugly mugs and pun-based humor. I recently found a copy of one of the comics, and it was moderately funny if definitely a product of its time with some really racially insensitive jokes about Asian-Americans in a story that involves a Chinese restaurant being tormented by a gangster to change their fortune cookies for...some reason. The lead story with the evil Dr. Frankenbeans making a female Madball to try and trick the other ones into killing themselves for her affection was cute though.

Anyways, thanks to Roar Comics (an imprint of the previously discussed Lion Forge) the series of, "Madballs," is coming back with a new comic available this April 20th! I had the chance to read a preview copy which featured the start of a few stories. As this preview discusses, there is the tale of an Intergalactic Bizarro Bowl where the Madballs compete in various challenges, as well as some other cool stories.
I'm happy to say that if you are familiar with the Madballs and liked them due to the puns and gross-out humor, you will be quite happy with this re-launch. I mean, just look at that cover up above! That is disgusting and also illustrated extremely well (and a bit funny). The contents of the comic follow that routine, with a variety of solid drawing, gross-yet-funny jokes, and a great deal of creativity (seemingly nice-yet-possibly-evil Madballs found via time-travel, anyone?) 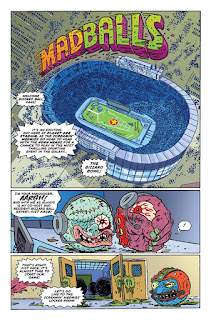 Even if someone doesn't know the Madballs--I only had some familiarity with them before seeking out the old comics and reading the new one--if you like good art and are either a kid or have a youthful sense of humor (yeah, my humor can be a bit immature and gross) this should be a title you quite enjoy. I would recommend picking-up a copy of, "Madballs," first issue this Wednesday, April 20th for sure!
4 out of 5 stars.

Note: A digital copy of this comic was provided for the purposes of review; I'm on a press-list so I get promotional emails and such, it seems.
Posted by David Charles Bitterbaum at 11:20 AM