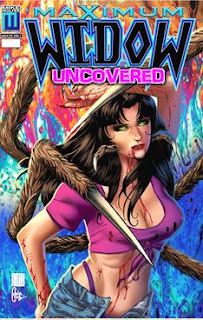 Friend of the blog Mike Wolfer is a man who seriously must never sleep, considering he seems to always be creating his own comics he puts out through his company, Mike Wolfer Entertainment, and often can be found running successful Kickstarter campaigns for the mentioned material he always is working on. Plus, he creates works for other publishers too, so again, he must not need those REM-waves! He just started his latest campaign yesterday, titled, "Maximum Widow Uncovered," and I wanted to talk about it.

I found his latest campaign especially worth note as it is a fun collection of his more raunchy covers and pin-up art that he discusses not having plans to make available in stores--unlike some of his successfully Kickstarter works. Also, for those who pledge at the $30.00 level he'll include some limited edition trading cards for a, "Witchman," character he has strongly hinted will be getting his own comic stories soon too.

I like giving shout-outs to Mike because as he always makes clear in his Kickstarter campaigns, without the backing of supporters who fund his works it would be incredibly hard--if not impossible--for his Mike Wolfer Entertainment to keep putting out his awesome books. While there are sales in comic shops, the funding through Kickstarter is what allows him to actually create his works and reward fans with special versions of the comics that can't be obtained in shops either! The fact that Kickstarter helps a creator gives us something we otherwise would lack is a prime example of someone using Kickstarter correctly, and all of us benefiting as a result.

So yes, check out, "Maximum Widow Uncovered," if you're a fan of Wolfer's work, his Widow character, pin-up art, or just like supporting cool creators.
Posted by David Charles Bitterbaum at 12:08 AM