I Tried the "DOOM" Beta and Shall Share my Thoughts

I tried the beta for multiplayer mode in the newest, "DOOM," release that will be coming out, um, lemme look here....ah, May 13th, there we go. Oh, and it is indeed just called, "DOOM," in all capital letters and with no, "4," even though it is the fourth entry in the series. I found the beta pretty fun, coming across as a decent arena shooter with nothing that made me go, "Wow, this is absolutely amazing." Then again, I also never went, "Jeez, this sucks," so there is something to be said for a title being dependably entertaining.

In the beta there are two current ways to play; there's your standard team deathmatch and a sort-of, "Capture this space/king of the hill/hold this zone," type of mode. Also, people can turn into demons and utterly demolish any opposing players during fights. There a is a bit more to it such as, "Hacks," and customizing your character and weapons, but the main, "Meat," is in the gun-play, and the game is solid at that. 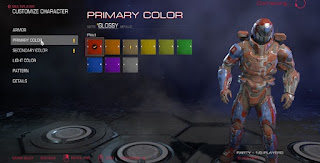 Considering how this is, "DOOM," you can expect a lot of bloody explosions from body-parts being splattered by weapons and the like. Interestingly enough, all the weapons are supposedly ultra-powerful (a rocket-launcher comes standard with one load-out) but by making everything theoretically powerful, you basically have made supposedly extreme weapons such as the rocket launcher seems like a glorified pistol--a thought others have had too, such as in this thorough breakdown of the beta that states, "...weapons can be summed up fairly neatly with reference to the rocket launcher. It’s a puny thing, dropped into the bog standard load-out where you might expect to find a pistol. There are no pistols because everything is turned up to eleven but, when everything is at full volume, nothing seems very loud, or very dangerous," Yup.

The questionable power of the weapons aside, it still was pretty good fun running around, shooting the opposing team, double-jumping, and otherwise causing havoc. There wasn't anything that felt particularly special about it, but there's always a thrill when you sneak up behind the player who last took you down and you blow them up. Taking into account how, "DOOM," will of course have a single-player mode and considering how the beta is just a taste of multiplayer, it would be presumptuous to make a conclusion based on the game based on this weekend of a free mini-trial. 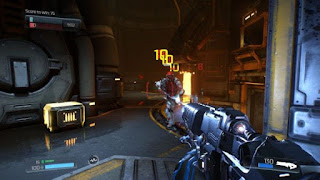 But wait! Seeing as how I'm presumptuous as a muthalover, I'll tell you that based on my time playing the beta that, "DOOM," strikes me as a game I may rent from a store/Redbox or check-out at my local library. After borrowing it from an establishment, this is a game I bet I'll have some forgettable fun with before I resume waiting patiently for, "No Man's Sky." Again, I'm using my powers of assumption and for all I know the single-player mode will be incredible with a story that sticks with me...but yeah, I'm betting this is some entertainment I'll ingest and promptly forget for the most part. Should still be a moderately fun rental though.
Posted by David Charles Bitterbaum at 5:33 PM