Some Thoughts on Batman and the Question of his Sexuality 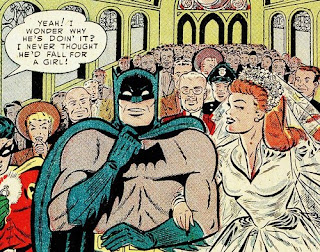 I read a recent and interesting article on Slate that discussed the question of a gay subtext in Batman and how it generally didn't become a thing for people until Dick Grayson AKA the first Robin, entered the picture. This article got me thinking about how on this issue I feel I might be unique. Why? It honestly wasn't until much later in life that the idea of Batman being gay even crossed my mind, occurring in 2012 due to the comments of a particular writer. Yes, that even includes the immense and intentional, "Gayness," of the over-the-top, "Batman and Robin."

It may sound silly, as we had the, "Campy," Batman of the 1960's people know well, the repeated subtext of the Joker having a love for Batman that borders on the homoerotic, etc. etc.. It just never really occurred to me though. Even any jokes about Batman and Robin doing anything sexual struck me as patently absurd because Robin was a child, Batman had his childhood robbed from him by a criminal, and pedophiles are criminals who hurt children--hence Batman would never do anything to harm a child (plus statistics show pedophiles are not necessarily gay even if they pray on someone of the same gender, there are a whole bunch of other factors at work).
Perhaps the reason I never thought of Batman being gay is the same reason I don't think about the sexuality of a rock; it is a rock, it has no sexuality. In the same manner  I never thought of Batman--or his civilian identity Bruce Wayne--having a sexuality. Batman's whole thing is a dedication to fighting crime, there is no place for, "Gay," or, "Straight," within that. Sure, Batman might seduce Catwoman, but is he really attracted to her or simply using romance in an effort to further his impossible-to-accomplish goal of ending crime?

Hell, you could even make the argument that regardless of if Batman were gay or straight, he never really had a chance to develop a sexuality. We are of course born with our attractions to certain sexes and genders, but often don't begin to feel these attractions until we enter adolescence. Bruce Wayne arguably never became a teenager. He is in a stunted childhood, forever that little boy crying in crime alley over his murdered parents and dealing with his rage the way a child would find appropriate--dressing up in a scary costume and beating-up the kind of people he thinks killed his parents.
With my lack of consideration of Batman's sexuality established it really smacked me upside the head (metaphorically speaking, I wasn't actually assaulted) when in 2012 Grant Morrison said in an interview with, "Playboy," how the whole concept of Batman struck him as quite gay. After reading this interview it was suddenly like I was in a dark room where the light had been switched on--and this room was all the subtext for Batman's sexuality. I suddenly saw that even if the jokes about him and Robin were patently absurd, the subtext of Batman's sexuality in other cases was still readily apparent. From the heavily fan-fiction influenced theories about he and Aquaman, to the more academic arguments about Batman's rage potentially being a repressed sexuality--be that a gay identity or possibly a straight identity heavily into kink, etc. Truly, the floodgates opened in my mind about Batman and the question of just what kind of sexuality this fictional character had.

For my money though, I would say I think Batman is actually straight, but rarely has time to take his sexuality into account. My main argument for this is that there is a woman in his life he clearly cares about deeply and even had a child with (although he didn't know about the kid, Damian, till recently), Talia Al Ghul. The daughter of one of his enemies, Talia is someone who within most forms of media that involve her is clearly someone Batman is immensely attracted to, and possibly even has feelings of love for. Batman and Catwoman of course have a thing too, but if she is his high-school girlfriend, Talia is the girl he met in college and wanted to spend his life with--and maybe if he survives his time as Batman and ever retires, will end-up enjoying the rest of his years by the side of. 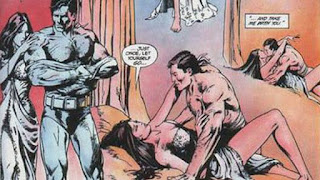 There would be nothing wrong with a gay Batman, I just don't think the hero as we know him is in fact gay. There are all kinds of subtext people can read into things, but at the end of the day I think Bruce Wayne truly would rather sleep with and fall in love with women--yet due to his unending war on crime will never have much of a chance to be an especially sexual being outside of an occasional rarer instance with Talia, Catwoman, etc.
Posted by David Charles Bitterbaum at 3:02 PM