We Waited So Long For THIS?--Batman: The Dark Knight #3 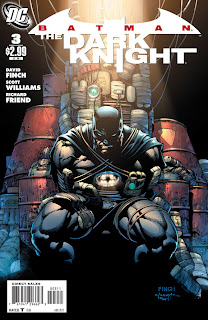 Batman: The Dark Knight #3
This was so horribly delayed, and for what, a miserable story with decent art by David Finch? I suppose so.

We've got an apparently possessed Ragman and the demon-creature Etrigan fighting, and Etrigan isn't rhyming for some reason (not that I'm complaining). Then we have some woman in Batman's car but I can't for the life of me remember how she got in there or why as the last issue was so long ago. We also have Jim Gordon talking about retirement (a moot point with the new DC Universe coming) and some new random guy popping up to make Gordon all angry. I list these random scenes because they make pretty much zero sense in the overall narrative of Batman rescuing a lady from the Penguin's warehouse because some years ago she embarrassed him. Yeah, that's it.

We get two issues of build-up about how this never-before mentioned character was a huge crush of Bruce's and it turns out she was also a bit of a jerk, and that the Penguin needs little motivation to resort back to crime considering how in all the other Batman titles I thought he was a slightly respectable businessman now or something. Also, who was the random bad guy revealed on the last page? Even people on the internet seem to not know, and folk on the net' love bragging about how they know everything! Really, the writing for this was terrible.
The sad thing is that the art in the comic is pretty cool, with some great scenes of Batman walking out of a burning building with his cliche damsel in distress, but when you have Jim Gordon threatening to, "Spank," someone because apparently they are a younger cop with no respect or something, you know you have a stinker in regards to writing.
1.5 out of stars (without the art it would be even lower)
Posted by David Charles Bitterbaum at 10:00 AM