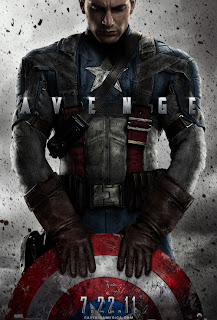 Captain America
It may be Sunday, but I was originally planning on seeing Captain America on Friday and making it my Film Friday segment. The laws of time and space aren't going to stop me from labeling it as such even though it is clearly late in the evening on Sunday! Anyways, what did I think of the movie? I really enjoyed it!
This was a fun movie, with a lot more time spent building up to Captain America going on his first, "real" mission behind enemy lines than I anticipated. We have the time with Steve Rogers as a scrawny young kid, getting empowered, being used a PR device, and then the movie kicking into crazy-action mode after having had one brief bit of it during the whole Nazi-chase Rogers does right after being transformed into his newly-muscular self. We also jump between Steve Rogers aforementioned journey to buff hero and the Red Skull's attempts at gaining power beyond all imagination thanks to the cosmic cube (it is never actually referred to as such, but comic fans know that's its "real" name). Clearly these two fellows find themselves fighting.

The movie goes at a brisk pace, never feeling too slow or dull, and all the little references to other Marvel-movie's or comic's continuity are a hoot for those who keep an eye open. There is a tiny bit of romance, the plot is pretty much simple enough a dullard could grasp it but does have a few intricacies, and the action is always exciting. 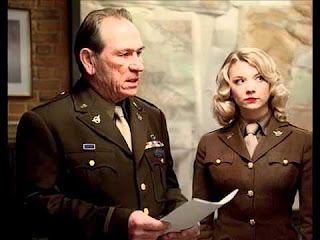 I would say Captain America is just about as good as Thor, although Thor was funnier whereas Captain America is more action-oriented. Neither are at the level of the Iron Man movies (I still love 2 even if more and more people are now changing their minds and retroactively hating it) but are above the slightly disappointing Incredible Hulk. Captain America is solidly entertaining and leaves me fully excited for the upcoming Avengers movie in May 2012. Speaking of which, make sure you stay after the credits, as you need to do with almost every Marvel movie. Interestingly enough Captain America seems to have made even a bit more than Thor did, so Marvel is doing something right with their super-hero movies for sure!
4 out of 5 stars.
Posted by David Charles Bitterbaum at 9:20 PM