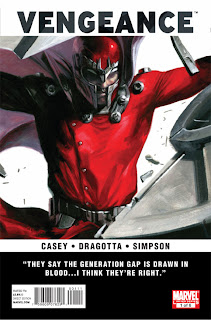 Vengeance #1
It took me forever to review this, because I couldn't find the words to describe such an odd comic as this. I can say at least that I loved it. Also, it shows that writer Joe Casey is crazy.

This is a Marvel comic book, it has Marvel characters after all, but it is so different than your normal Marvel comic. Look at weird trash like Fear Itself: Fearsome Four (which I mention as Nighthawk pops up in both) and then weird awesome-sauce like this and its like going from walking on earth to floating in the stratosphere of our planet. This is just one odd comic. It has bits that seem to have nothing to do with the main plot but surely do, such as a one-page scene with the Red Skull and Hitler during World War II, or an old man at the beginning. This also mentions Fear Itself (it has a scene from the first issue broadcast on a a television) but in a way that kind of outright mocks it--which immediately put this comic in a warm spot in my heart. What is this comic about though? I'm not outright sure.

Vengeance seems to be about the disillusionment youth feel today, trying to make a difference in the world...but are they good guys or bad guys? It seems unclear. We have this new guy named Ultimate Nullifier who is a bit annoying but writer Joe Casey seems to want to make it clear he's supposed to be a bit grating when another character comments he's just, "Another misunderstood teenager screaming at the world from his video game chair." I can't outright hate Ultimate Nullifier though, because he makes some interesting points: 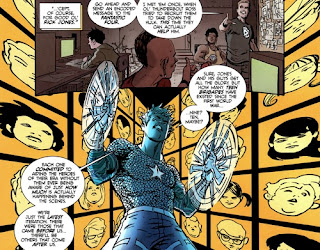 It is about aiding the heroes from behind the scenes, but the team is unaware that Nighthawk--Kyle Richmond, may be on to them and his Defenders may take them down if I am reading this comic's hints correctly. Again though, I've struggled to find the words to describe this comic as it is so strange and hard to describe. It's about youth vs the older folk in a way, heroics and evil, a secret history of the Marvel Universe possibly, and weird monsters from another dimension or something. 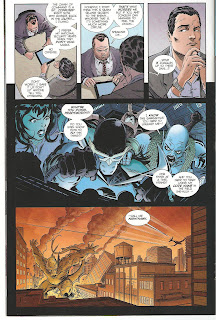 This was really great, but my biggest complaint would have to be that quite frankly a good amount of time I didn't have a clue what was going on. I'm pretty sure by the end of the series everything will be clear and make sense and I'll want a trade of this based on the highly enjoyable first issue alone, and that trade will be incredible. Right now though, having the first issue alone left me scratching my head a bit too much to say this was 5 stars--it was still pretty damn close and super though.
4.5 out of 5 stars.
Posted by David Charles Bitterbaum at 7:28 PM