This Series Is Getting Kind Of Awesome--Daken: Dark Wolverine #11 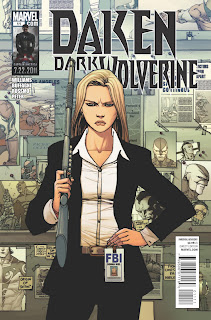 Daken: Dark Wolverine #11
Rob Williams came on board to a series that was decent and over the course of just a few issues has turned it into something I look forward to more than any other Wolverine-related comic as of late. Now that's a quite a feat!

Perhaps it is how Rob Williams is having Daken actually enact clever plans instead of just telling the readers Daken has a big plan and then not showing us anything. Maybe it is the introduction of FBI agent Donna Kiel who seems almost more interested in catching Daken because she enjoys the challenge of it than having a genuine desire to stop him. Or, speaking of challenges, maybe it is how Williams points out throughout the series everything has been so easy for Daken as he has been written as some sort of super-skilled character, and Williams turns this on its head by having Daken admit he is bored with things being easy. I think it is all of these things, along with the fact that Daken finds a drug called "heat" that beats his healing factor and results in some incredible-looking art to show us readers his "tripping" on the drug. This is just a really entertaining comic! 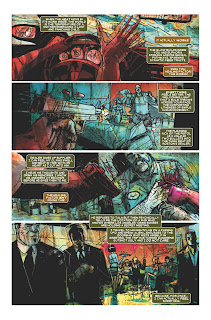 Rob Williams realized that by taking Daken out of Wolverine's shadow and having the character do his own thing in a new place, like in LA, an interesting story could be told that isn't possible with heroic characters or even anti-heroes. Daken isn't a good guy, he's pretty much villain, but when written well he's fascinating and interesting enough you kind of want him to succeed. Interesting characters, well-written dialogue, a plot that actually makes sense to the reader unlike in previous arcs where we were in the dark about just what Daken had planned...yeah, things are pretty snazzy in this series as of late. 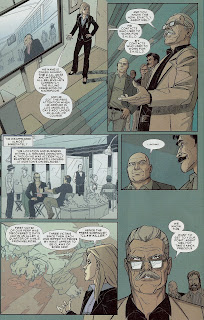 Daken: Dark Wolverine has gone from a comic I would have considered dropping to a must-read. Williams has given the series a a shot of energy and enthusiasm it needed and the result is one fine comic that I highly recommend.
4.5 out of 5 stars.
Posted by David Charles Bitterbaum at 1:30 PM