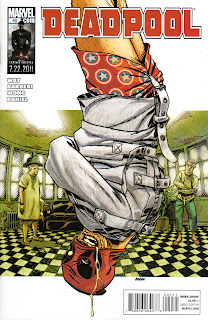 Deadpool #40
This issue of Deadpool is funny, has some hyper-violence, and peers a bit into the mind of the character, so all around we get a pretty solid issue.

I think Daniel Way is best on Deadpool when he finds a way to keep the book funny but also bring in some serious examination of the character of Deadpool and what makes him tick. I loved the issue where Ghost Rider makes Deadpool peer into his past, and in this issue Deadpool is faced with the fact that he is locked up in a place for the insane where he is going to have to face some of his own inner demons--from being self-conscious about his appearance to not wanting to face who he really is--and possibly change whether he wants to or not. The only thing that really bugged me is everyone talks about his doctor, Ella Whitby, as being ugly. The art just doesn't convey that at all. She looks perfectly normal and I don't see what makes her a, "Shrew," as one character describes her. I guess the artist is to blame for making his female's too attractive. 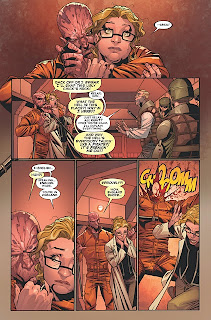 This was a good issue of Deadpool and I look forward to more with the character in this environment. Apparently we are possibly building to some big occurrence in 2012 when Deadpool really ends up dead, so that should be fun.
4 out of 5 stars.
Posted by David Charles Bitterbaum at 10:45 PM