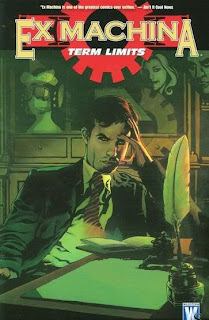 Ex Machina: Term Limits
Collecting issues #45-50 of Ex Machina AKA the last ones, this 10th trade in the series (I read it in trades as I didn't start till the series was already in the fifth book) wraps up the complex political-super-hero-sci-fi-thriller-comic up wonderfully.

This was a great series for me. I love super-heroes. I love politics. Where else could I see a comic about a guy who has super-powers and is the mayor of New York? In one issue/part we get actions and explosions and policy discussions about the morning-after pill--and the whole thing works in a delightful way thematically. This is also a great conclusion to the series because the comic has been building to it from the start, we opened in the present and everything has been one big flash-back. Well, we finally see just how things turned out, and it is arguably pretty interesting and I'd say depressing even though some argue it's ambiguous. Our main protagonist himself, Mitchell Hundred, sums things up pretty well however: 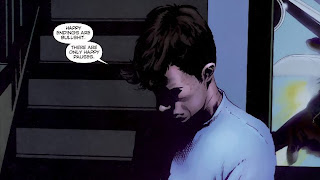 Oh, for those of you who haven't been following the series, it's a tale where a man gained the ability to talk to machines due to a device from an alternate universe or something (I don't want to explain it too well as that's part of the mystery) and on September 11th saved one of the towers, was running for mayor, and with that act of heroism won. There is a lot more complex stuff, but that is the basic high-concept to sell you on the comic. It's a fascinating series even if at points it seemed to kind of meander from the main story it was telling and run a bit long in reaching the big 50-issue end-mark, but it was still amazing stuff. This trade wraps up the whole thing nicely and writer Brian K Vaughn is definetely a pro at great stories--then again he also made the seminal, "Y: The Last Man" so folk know he's got talent. Tony Harris illustrates and he does a solid job too, even if he really goes heavy on the photo-referencing for faces and poses. 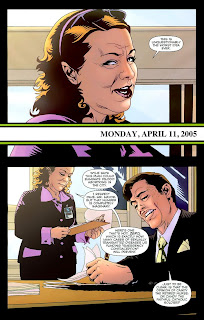 This series seemed like something that would have just appealed to an odd niche with its politics and sci-fi stuff, but it became a pretty big hit and I'd recommend reading it from the start without hesitation. Interestingly enough, the first and last issues and trades are probably my favorites. Vaughn needs to write some more comics, he seems to be doing less of it and I want more of his skills put to paper!
4.5 out of 5 stars.
Posted by David Charles Bitterbaum at 2:00 PM