Movie Time--Transformers: Dark of The Moon

Transformers: Dark of The Moon
I saw the new Transformers movie in theaters. I have opinions.

This was 2 hours and 30 minutes long and in 3D. I left with a headache due to my brain having to process the 3D effect for that long, but other than that the movie actually wasn't that offensive to my senses. I mean, it was better than the horrendous Transformers 2, and despite being utterly predictable had some genuinely impressive special effects and acting that wasn't terrible thanks to the fact they got rid of Megan Fox. Don't get me wrong, this wasn't a masterpiece by any stretch of the imagination and they could have shaved off 45 minutes to make this thing a bit less lengthy, but I had some fun.

It is a movie about robots fighting robots and humans fighting robots, what do you expect? At least the acting is decent, and imagine my surprise that they got real-life astronaut Buzz Aldrin for this. Then again he is known as a notorious press-hound so I'm not surprised he pops up. Neal Armstrong is the person who keeps a low profile in real-life, but I digress on my rant about Buzz Aldrin and how he behaves like a huge ham (seriously, read up on NASA and you learn about Buzz, though I give him credit for punching that conspiracy-nut who accused him of lying about going to moon). Oh, the new girlfriend character is okay, although she doesn't seem to have much to do in the movie other than serve as a plot device of someone who needs to be rescued or stand around and look pretty while things explode. Seriously, there is a bit where she just stands there looking vacant while all these explosions happen around her, I wanted to yell out in the theater for her to run. Why am I even talking about the acting though, you care about the explosions and cool effects. Boy howdy are there a lot of them. We've got buildings collapsing, cars rolling around on the highway, spaceships crashing, and all sorts of mayhem, its a good time. I've never been one to accuse director Michael Bay of skimping on spectacle. 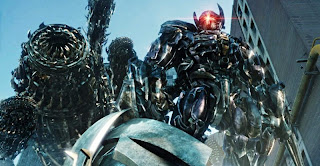 What's the plot, you say? It actually starts out kind of interesting, with the idea that the whole space-race was actually just to try and reach an alien ship on the moon, but then the plot dissolves into utter incomprehensibility and mush when we get to teleportation and something with trying to bring Cybertron into our solar system (wouldn't putting it so near Earth throw off our orbit anyways?), and Chicago being destroyed because humans are to be slaves, or something like that. I don't know, the plot lost me about an hour in but I didn't mind because of all the pretty explosions. 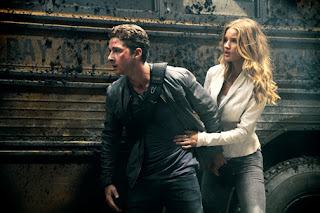 Overall this movie was a perfectly fine way to kill almost 3 hours (because with the previews before the movie this becomes essentially a 3-hour experience). Despite not being anything that will inspire you to think deeply or anything like that, it is good and mindless entertainment. At least it isn't Transformers 2, right?
3 out of 5 stars.
Posted by David Charles Bitterbaum at 5:26 PM