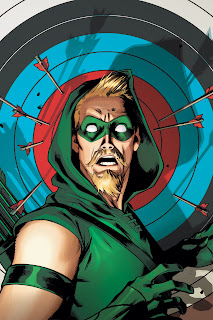 Green Arrow #13
After 12 issues marginally trying in to Brightest Day, and with normal writer J.T. Krul gone to get ready for writing this series when it re-launched in September, we get this and two more issues for what is a fill-in arc. The sad thing is this comic slightly improves without Krul writing Green Arrow as it is a character I just don't like him on, but the even more sad thing is that the comic still is quite average.

We have a flashback of Green Arrow shooting cadavers at a hospital to learn how arrows affect the human body. Well, its great to know that even without Krul we get plenty of limbless bodies in comics. We then get to main plot of how a religious nut and his crew have engaged in terrorism and now he's locked up and being transported...but they need Green Arrow to accompany them because this crazy fellow and his crew apparently like their high-tech gadgets. We have some discussion of how Green Arrow killed Prometheus in that miserable, "Cry For Justice" comic and doesn't have the heart to kill this bad guy when he's about to escape so now he has to track him down. Not bad or particularly good writing. As for how it looks, my eyes weren't offended. I wasn't that impressed by the artistry either, however. 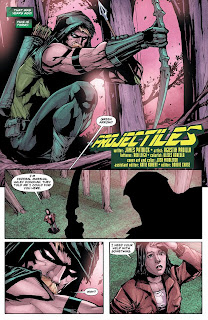 The writing is okay, the art is decent, everything is purely average, but doesn't matter one lick as the whole series is getting re-launched with regular writer JT Krul coming back to make things miserable, so in the end the greatest level of caring I can muster is saying this whole ordeal is,"meh".
2.5 out of 5 stars
Posted by David Charles Bitterbaum at 9:00 AM