Look, Marvel, it was slightly funny the first time you did it with Blackest Night tie-in comics, but repeating the same stunt where you will now take issues of Flashpoint tie-ins with their covers torn-off and for 50 of them you give people an alternate cover to Fear Itself....you're just kind of being a dick now. Plus, last time you had a slightly funny cover with Deadpool, this just looks like a quickly thrown together one that doesn't have anything special to it: 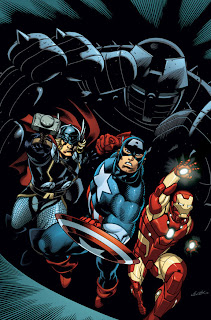 Also, in the article you act like you're doing retailers a favor, "In these tough economic times (as shown in the above link)," for real? Wouldn't retailers possibly make more just selling the comics cheap instead of trying to pass of that ugly variant cover for a bunch of money? Better yet couldn't those comics with the covers they have to rip-off be donated to a library or something instead of being pulped? Tacky, Marvel, just tacky.
Posted by David Charles Bitterbaum at 7:00 AM