Red Skull Incarnate #1 AKA How Evil Is Born 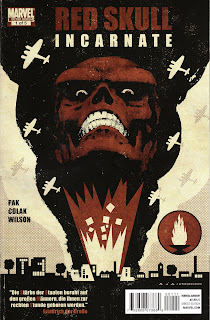 Red Skull: Incarnate #1
The sequel of sorts to Magneto: Testament, which told the story of how a young Max Eisenhardt went from a young Jewish boy who suffered under the Nazis to the character of Magneto, this series tells the opposite side of the coin--how Johann Schmidt goes from a seemingly kind boy to the monster known as the Red Skull. Magneto: Testament had Greg Pak writing it and it only makes sense he writes this story. Is it good though?

This is a depressing comic. It's sad because Schmidt doesn't seem like a monster yet--he's still human, it's sad because he pretty much has it drilled into his head from a young age that everything is the fault of Jews, and it's sad because it's a book about one of the darkest points in history. It's interesting that Greg Pak writes some of Marvel's more fun and peppy books and then also does these very dark and interesting pieces he discusses researching so that he can be as historically accurate as possible (a historically accurate comic about    super-heroes and villains, who would have thunk it). The story starts somewhat slowly, but Magneto: Testament did too so I'm not overly worried. The art is nice too, so no complaints there. 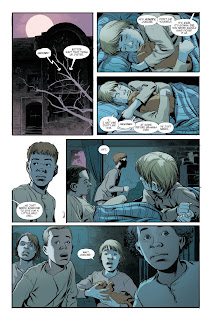 This is not going to be your usual fun comic to read. It's about how someone became one of the most evil characters in comics and representative of the most evil of people in the world. It's tangentially a super-hero comic, but is really more of a history-type comic with some Marvel elements in that this is about the Red Skull and his origin--in the same way that Magneto Testament was about how Max became Magneto, but was more-so about the Holocaust. It's still a well put together comic however, and bound to be and interesting and informative read.
4 out of 5 stars.
Posted by David Charles Bitterbaum at 12:00 PM