Epilogue To A Story That Isn't Finished--Green Lantern: Emerald Warriors #11 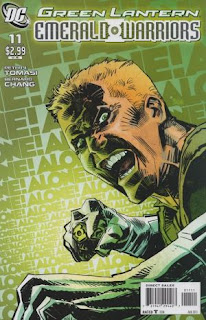 Green Lantern: Emerald Warriors #11
Well, this is awkward. We have an issue taking place after "War Of The Green Lanterns" when the last issue of that hasn't come out yet due to delays. On the positive side this doesn't spoil anything because its sort of a generic story about Guy Gardner going home to earth for some, "R&R" and things of course not going as planned. It's still a bit uncomfortable to have the letters page open by asking if I'm, "exhaused after the epic," War of the Green Lanterns and then saying how, "Of course you're not!" Well, I can't say either way because it hasn't ended yet. I won't judge this comic based on that scheduling snafu though, I'm just going to rate this as its own thing....in which case it is barely above-average.

Guy Gardner rescues someone, things aren't what they seem, he loses his ring and has to get it back whilst making quips, a big twist is revealed, issue ends. I have just summed up the formula this issue follows as a sort of stock filler-story being made to fill the time between now and the big re-launch that is coming soon from DC. They needed something to fill out the next couple of months so we get a perfectly fun and serviceable story about Guy Gardner and what an outrageous guy he is, but its also purely disposable entertainment. It just follows a set story formula and doesn't do much that is interesting with it, turning in decent art but having a story that makes it clear Peter J. Tomasi was dedicating his efforts to his Green Lantern comic he's working on after the re-launch and not this. 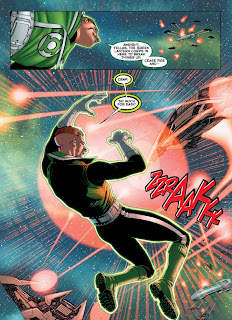 We had a fun enough story with good art, a run-of-the-mill plot, and nothing too amazing but everything was good enough. I guess this is the problem with a big re-launch coming, in that comics will have to sit there and be spinning their wheels for a month or two as we wait for all the big new stuff to launch. At least this wheel-spinning is entertaining enough to feel like it wasn't a waste.
3 out of 5 stars.