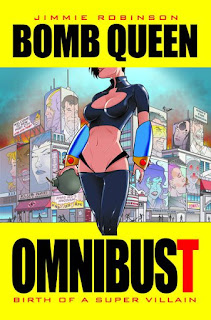 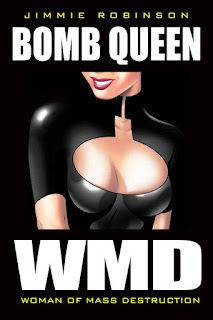 Bomb Queen Omnibust (Just Volume 1: Woman of Mass Destruction)
I bought the Bomb Queen Omnibus(t) on sale but thought I would just review the first trade it contains as many folk might just want to pick that up to see if they like the series in general. As for what Bomb Queen is: Well, it's sort of a parody of super-hero comics, a commentary on politics, and a spoof of cheesecake comics while also fully embracing being one (kind of like "Empowered"). Is it any good? Read the darn post and find out...

First off, I just wanted to say in this era of comics having separate people to do all sort of parts of a comic, it is impressive to see that creator of Bomb Queen, Jimmie Robinson, almost did it all. He did the writing, the art (pencils and inks) and the lettering, with only the color-work falling to someone else. As for the comic's story? Well it takes place in the "Image-verse" where all the Image heroes co-exist yet in our real world creators maintain rights to them (how that works out must be tricky when it comes to paying royalties for these comics) and takes place in a city where there are no heroes, just a villain who runs the whole place named (obviously) Bomb Queen.

As Jimmie Robinson says in the introduction to the Omnibust, she is a pure villain, no misunderstood hero or anything like that, she's just an evil gal, but a fun one at that. In the first trade a politician has the goal of becoming mayor of her city and pushing her out, and hires a hero to assist with the job. This results in all sorts of action and jokes and gratuitous poses (which Bomb Queen even somewhat breaks the fourth wall to point out she is doing--hence my comment that the comic is both making fun of cheesecake and indulging in it). It's fun, funny, and well-drawn if definetely a bit crass and tacky, and probably best read by the teenage-and-up crowd with all the swearing, sexual innuendo, and Bomb Queen's tendency to have her skimpy outfits get all shredded up during fights. The comic also can be quite clever with its incredibly dark humor and political commentary, however, and that is what made it appeal to me after the silly violence and suggestively-drawn Bomb Queen started getting dull. 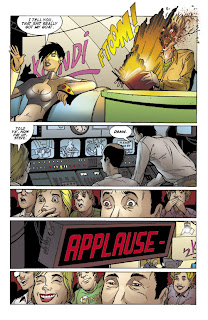 The first trade collected in this omnibus(t) which I have reviewed is definetely good fun, and beneath the dirty jokes there are some genuinely clever elements. I'd recommend at least picking the first trade up and if you have the scratch and possibly getting the omnibus(t) if you find you enjoy Bomb Queen.
4 out of 5 stars.
Posted by David Charles Bitterbaum at 10:29 PM