"Alpha Flight Soars" Or Some Other Terrible Pun To Indicate I Enjoyed #0.1 and #1 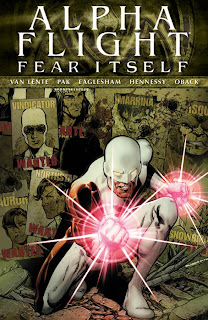 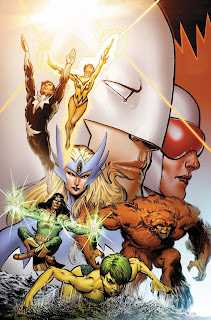 Alpha Flight #0.1 & #1
Wow, this was quite entertaining and I am glad I picked it up due to having heard good things even though I don't normally read Alpha Flight because only two of the characters interest me at all (I've always thought Sasquatch is cool, and I have a soft spot for Northstar when he is written well and not just as the token-homosexual character but instead the snarky wise-ass I enjoy. Maybe because I'm a snarky wise-ass). This was really good though, even more surprising considering this ties in to Fear Itself somewhat and that actually helps it make a good story instead of having it suck all the air out of the room.

Greg Pak and Fred Van Lente know how to not take themselves too seriously, which is good because it enables them to make comics that aren't just constantly dark and grim. These comics have serious elements, but also actually made me crack a grin, and that is refreshing. Also, they write everyone really well and pretty much give all the characters screen-time throughout both comics--something team comics sometimes seem to struggle to do, focusing on a few key characters and ignoring everyone else. This #0.1 issue business still bugs me something fierce though. I just don't get why you have a .1 issue before the first issue, explain to me how something Marvel created to serve as a helpful jumping-on point needs to occur before a first issue, the best jumping-on point usually of any? Sigh. At least that #0.1 issue reads in a way that make it so you don't have to have picked it up to understand the first issue. That would really be bad and defeat the purpose. 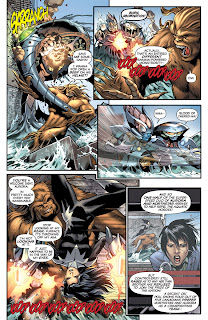 Basically the Alpha Flight team fights some Fear-Itself powered villain, but that isn't the real bad guy, no, its the newly elected Candian Prime Minister! Wait...what? That's right, the horrible bad-guy is a politician in the land of our neighbors to the North. I like this, the Alpha Flight comic uses Fear Itself as a way for the true monster to set their plans in motion instead of just having everyone fighting some hammer-wielding baddie. It's good stuff, with serious bits, funny bits, and I look forward to seeing where these eight issues go.
4 out of 5 stars.
Posted by David Charles Bitterbaum at 5:06 PM