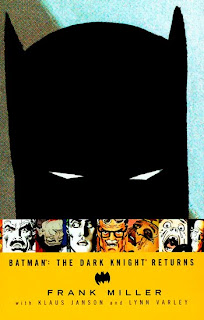 Batman: The Dark Knight Returns
I may not be too big on Frank Miller's new stuff, but when it comes to his past work, he was an utter God. This is one of the top Batman stories you'll ever read. Let's discuss it in-depth. I spoil a ton, but this thing has been out forever, so the fact I hadn't read it was kind of embarrassing--you ought to know everything too or be cool with spoilers.
The trade I read this in collects the four "books" that originally held this tale. It is the story of a fifty-five year-old Bruce Wayne who quit being Batman almost 10 years ago and Gotham has pretty much gone to Hell in the meantime. Throughout the four books Wayne puts the cowl and cape back on, confronts Harvey Dent (Two-Face), a new gang known as the mutants, has his final showdown with the Joker, and gets in a knock-down brawl with Superman to close out the book. We also get a lot of awesome psychological examination of the character of Bruce Wayne and Batman. Batman is a sort of thing that controls him and sucks him in, and in the end he can't fight it and starts being Batman again, with it all going back to that night in Crime Alley where his parents were murdered. It all started there, and it all ends there. Bruce Wayne is an old man, but Batman isn't defined by age, he is an unstoppable force. 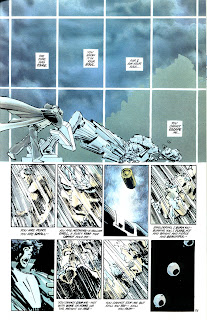 We also get interesting political commentary in this book. Miller clearly has some negative thoughts on liberal folk who think people like the Joker or Harvey Dent are just sick and can be cured, with the doctor character in the book being quite grating and annoying with his insistence that it is Batman's fault these people exist, that by Batman being present they feel a need to fulfill the opposite void, as it were. Oddly enough, even if the doctor is a huge pain he sort of is right, as the Joker has been catatonic for nearly the whole 10 years Batman was gone, but snaps out of it when the Dark Knight begins enforcing order again: 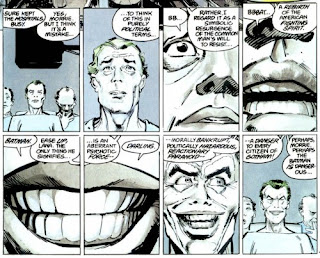 Miller also mocks the hippie parents of the new Robin, but Miller isn't some arch-conservative in this book per se. He paints a very unflattering picture in my opinion of the President in the book, who is never outright said to be Ronald Reagan, but looks just like him, and talks with his style and cadence. He portrays Reagan as a bit of a ninny who relies on Superman to do all his dirty work, as Superman has now become little more than the US government's property, doing whatever he is told without question. Liberals who want to coddle criminals are made to look like buffoons in Miller's book, but conservatives who want to have blind civil obedience and no questioning of the system are also shown to be idiots or extremists. Miller has always had an interesting mixture of political views, and it shows in this book. Basically he is saying that no matter who is in power sometimes it takes someone going against the law to enforce it--if that oxymoron makes sense. 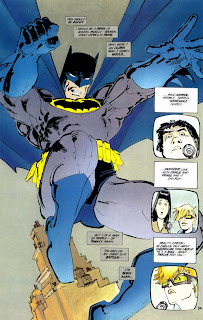 The first two of the books (well, in this graphic novel format they are chapters) are good, but I find things really kick into overdrive in books three and four, where Batman has his final fight with the Joker and finds despite everything telling him to, he still can't do it. He can't kill. It doesn't matter though, as the Joker kills himself and makes it look like Batman did it. 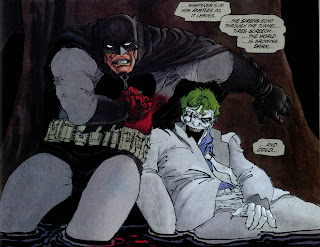 This leads to the utterly off-the-wall book four where a nuclear bomb specially designed to knock out electronics plunges the world back into the dark ages and everything just goes mad--or would, if it weren't for Batman. Then we get the epic confrontation between Bruce and Kent, Batman and Superman, however you want to put it. It's sad that it is so short, but boy is it great. Yeah, plenty of comics have had these two fighting, but this was one of the first times it felt so visceral, so real. In the end, Bruce fakes his death, and goes underground to begin training a new generation of crime-fighters, a fitting end to the book that isn't too happy or a complete downer. 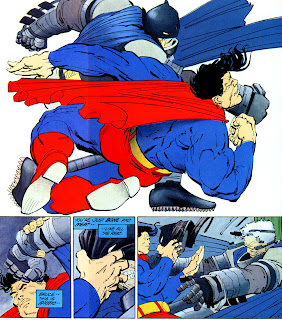 This is a seminal book. It's possibly one of the best Batman stories ever told, one of the best things written by Miller, and just one of the best comics around. People had always told me these thing I just said, but I hadn't quite bought the hype. Well, I see what all the fuss was about now. It took me a bit to get into it, but by the end of the book I was completely absorbed. If only there were a sequel...what's that? Dark Knight Strikes Again? The book I skimmed and found completely insane and incomprehensible but kind of cool? The same guy that did this made that? Frank Miller, I seem to either really enjoy your work (This, some of the Sin City books) find it completely off-the-wall (Dark Knight Strikes Again, some of All Star Batman and Robin) or really not feel it (300, most of All Star Batman and Robin). This though, yeah, it's awesome.
5 out of 5 stars.
Posted by David Charles Bitterbaum at 10:22 PM