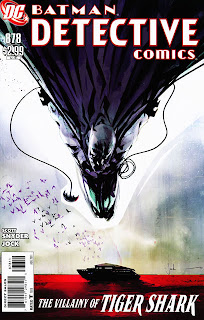 Detective Comics #878
We have here a well-designed issue that wraps up the "Hungry City" story business whist keeping the over-arching plot of James Gordon going. Does this continue a trend of excellence on the comic? Let's find out...

Scott Snyder expertly wraps story aspects together and Jock turns in stellar art as always with a conclusion that both makes sense and which I would not have predicted. Plus, that last page of this comic is incredibly disturbing, which without me spoiling it, I will say finally answers the question of if James is dangerous or just misunderstood. The only disappointment really is the new villain we meet, named Tiger Shark. He is basically just a guy in a suit who wears endangered animals and has an odd mask. What happened to the outlandish Batman foes we all know and love? Do we have to get all gritty and normal-looking with our bad-guys now? The hook with Batman is he is dark and human but his enemies are crazy and over-the-top. Just look at some of them: Clayface, Mad Hatter, Poison Ivy, all crazy foes. Eh, its not too big an issue, it just seems like a wasted opportunity. 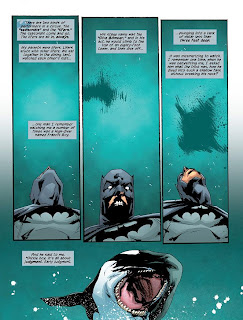 This was another enjoyable issue from Snyder and Jock, that was only dragged down by how heavily it relied on us finding the villain cool, and how much I did not. The conclusion with James Gordon that is approaching should be quite the rollicking time however, and I'll be sad when Dick Grayson is out of the Batsuit because Snyder does such a good job writing him. Yes, Snyder will be writing the main Batman book and is essentially getting promoted, but that will be Bruce Wayne in the suit under his pen. It's just sad because unlike Tony Daniel in the current Batman comic, Snyder has excelled at showing how this Batman is different but just as great. Oh well.
4 out of 5 stars.
Posted by David Charles Bitterbaum at 10:00 AM