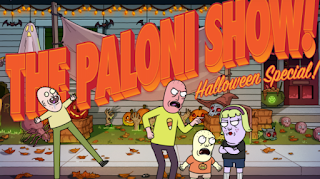 As everyone argues whether Cartoon Network (and by proxy, Adult Swim) is dead/dying or just fine, Hulu has quietly dropped a Halloween special that seems a bit like a way to backdoor pilot a slate of its own animated show ideas. This occurs within a program/one-shot/pilot itself that dropped yesterday, "The Paloni Show! Halloween Special."
Created by Justin Roiland (one-half of the, "Rick and Morty," founding team and a creator of Hulu's show, "Solar Opposites," too), the framing device of this hour-long program is the Paloni family as they struggled to host a quality Haloween show between having to babysit a nephew with absurdly long legs, avoiding a serial killer, and other dangers. Between the Paloni family's mayhem, there are 13 shorts that vary in their animation style (one is claymation and another is actually live-action). Many of the shorts incorporate the holiday Halloween or riff on horror movie concepts, but nothing is especially, "Scary," so much as sometimes over-the-top silly in a variety of ways including some cartoony violence.

When it comes to the shorts, I would say 1/3 are fantastic, 1/3 are okay, and 1/3 are...well, they're bad (some shorts are just dull and lack much of any idea or are simply really ugly in their animation). The good stuff really sticks with you though, like a town where the mayor banned anything scary that increases in absurdity as the bit goes on. I also really liked an animated Megahex segment that was made by the comic's creator, Simon Hanslemann. A weird story about a seemingly ineffective apartment complex manager also becomes inadvertently bittersweet as it features one of the last recorded performances of Gilbert Gottfried--who passed earlier this year.
Overall reviews of, "The Paloni Show! Halloween Special!" are mixed. I've seen some positive takes that admire how bizarre and off-kilter the whole thing is. I have also spotted reviews that have the same opinion I do about how the shorts vary immensely in quality, but overall it is a fun program that sets up possible future Hulu shows in a cleverly subtle manner (please, PLEASE give us a full Megahex series). I would say the entire thing is a solid 3.5 out of 5 stars. If you like the kind of weird shows Roiland makes this is mandatory viewing, but if you've found yourself struggling to ever enjoy the kind of stuff on Adult Swim or the like, maybe pass on this. I liked it.
Posted by David Charles Bitterbaum at 11:43 AM