The October 2022 ToyMan Show Was Loaded With Good Stuff! 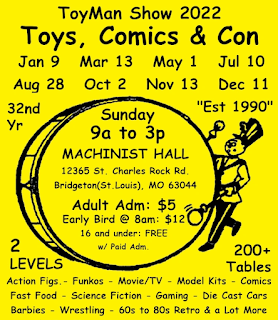 Before this most recent ToyMan show, it was advertised there would be some new vendors and vendors who were newer to the show. I met some folks who I hadn't seen before (and bought some new cool goodies) so that was indeed true and made for quite a fun time meeting new people and seeing old friends! When I walked into the show I first saw my good buddy Spike of Lost in Space Toys and Collectibles. I also saw the always friendly Tom from Alliance Comics, Toys, & Games. I proceeded further onto the show floor (which was stuffed as always with awesome things to peruse) and saw Vince of VK Toys at his table. He had a bunch of great comics and toys. I met the good folks behind Back in Time Comics & Toys who had a great copy of, "New Avengers," #40, the 2nd printing which features the Skrull Queen Veranke's first appearance (and cover appearance). Give it a look: 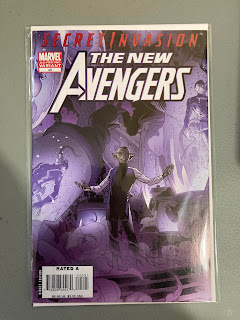 Then I went over and chatted with my awesome friend John Chaffee of Bigfoot Comics and Collectibles. I also saw my good chum Tim Metzger selling comics. I made the acquaintance of the owners from Retro Resale and enjoyed looking through all the great comics they had brought to the show. In the upstairs area, I saw the talented Lindsay Hornsby of Mega Giganto--she always has the most fun comics/stickers/pins/so forth! I met author Jacqueline James and checked out her books as well. Back downstairs, I saw Toys of Our Youth and then Konnor Tate and Co. of Tatertot Comics and Collectibles had a table set up and I got a stellar deal on the first appearance of Madame Web and the first appearance of Damian as Batman. Observe: 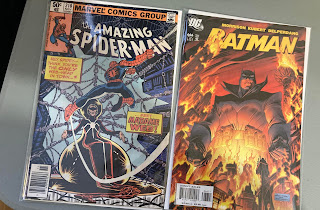 This ToyMan show was a fantastic way to kick off my favorite month of the year, October. The sheer amount of toys, Funko products, die-cast cars, magazines, comics, and other neat stuff was astounding as it is anytime I come to show! I would undoubtedly recommend coming to the next ToyMan show on November 13th, with all the details available via the show's website digital flyer.