Flashback Friday: Thinking About When OutKast Took Over the Grammy Awards 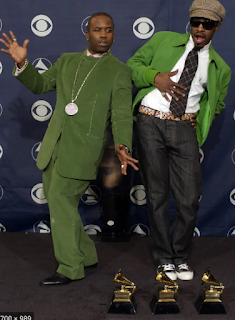 I've made it abundantly clear on this blog that my favorite musical group of all time is OutKast. Big Boi and Andre 3000 are each musical genuises in their own right and as OutKast they created masterpieces. I was listening to some of their 2003 album, "Speakerboxxx/The Love Below," and remembered how it swept the 2004 Grammys, winning best rap album and being one of the few rap LPs to win best album of the year, period ("Hey Ya," also won best urban/aternative performance). Even if the Grammys are rigged, seeing OutKast get recognition is always a good thing. I went searching on the internet for the live performance of, "Hey Ya," that brought the house down back then, and actually found a clip! Be forewarned the performance does appropriate a lot of Native American culture, but it was 18 years ago so a lot of things haven't aged perfectly these days. That aside, the performance rocks:

I swear, I continue to wish we get just one more OutKast album before the World ends in a fiery ball of war, fiery ball from global warming, or something else terrible that seems inevitable with the state of our planet these days. One can dream (which I actually have done).