What Were you Thinking, TwitchCon? 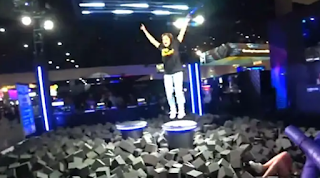 Twitch is a popular streaming platform where people play games or do some kind of hobby and chat with viewers. I've checked Twitch out on occasion and see the appeal although I'd usually rather play a game myself than view someone else doing it. Twitch had a big convention full of popular streamers called TwitchCon and it was going well until multiple people injured themselves in an incredibly poorly constructed foam pit. People were encouraged to jump into it and streamers twisted ankles or hurt their backs on some foams placed on a concrete floor just a few cubes deep.

A streamer named Adriana Chechik broke her back in two places and has been tweeting she will require surgery. Apparently, Chechik hasn't just streamed safe-for-work stuff on Twitch, she recently was doing Onlyfans/other pornographic content and in a disturbing trend, some people have made jokes about her being hurt or otherwise indicated that because she's done sex work she deserves injuries. I've stated before that I believe sex work is work and if we destigmatize sex and legalize all sex work that will actually help put more funds towards actual sexual abuse and trafficking instead of wasting resources on prosecuting consenting adults engaging in sex work/porn/etc. I'm on a soapbox thanks to my MPH, however, so I digress. 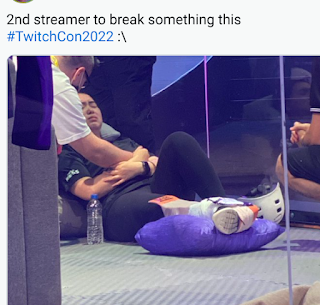 When you have any sort of attraction at a convention, theme park, renaissance faire, or so forth you need to make sure it is safe. You can't just slap together something that looks fun and think the fun factor overrides the importance of public safety. Again, the public health student in me is immensely disturbed by the apparent lack of standards for avoiding getting people horrifically hurt. I already hesitate to jump into foam pits at trampoline parks, I can't imagine just diving into one built on a floor with zero padding.