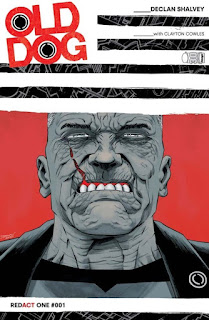 Declan Shalvey has written and illustrated many quality comics, with his latest release, "Old Dog," (published by Image) featuring him both as the writer and artist. This benefits the comic greatly as the debut issue of this combination sci-fi and espionage comic (Image calls it, "Spy-Fi,") is a treat. The comic follows a longtime CIA operative named Jack Lynch who horrifically failed a mission in the past (little is revealed but a lot of people apparently died) and now is mainly stuck at a desk job. However, after a strange encounter with some top-secret enemy tech, our protagonist finds himself biologically changed in a variety of ways that make him a prime candidate for getting back in the field with a new mysterious Governmental division.

Shalvey's art is unquestionably on point here, with the aged Jack Lynch's wrinkles each looking like they could tell a detailed story. The comic has a number of action-packed moments and they feel intense and adrenaline-filled thanks to Shalvey's masterful illustrations. Shalvey's writing is superb too, making us genuinely care a bit about Lynch and wonder what exactly happened to him years ago to make him so miserable. A little last-minute twist revelation of the nature of another character in the comic makes me wonder if this comic will be focusing on the dynamic of an "Old dog," with a younger partner as well in future issues. It's a great debut issue and I look forward to more!