Television Tuesday: Damnit, Do I Feel Bad for Billy Bush? 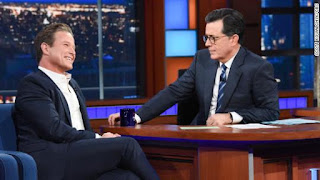 I was never a big fan of Billy Bush when he would appear on The Today Show or Access Hollywood. He struck me as kind of smarmy and one of those bland television hosts who dreamed of great success but got stuck just popping up talking about the celebrity news. There was of course a famous incident where a tape leaked of Donald Trump on a, "Hot mic," talking to Billy Bush and other people before an Access Hollywood segment was taped some years ago when, "The Apprentice," was at its peak of popularity. Trump essentially outlined how he was a in favor of sexual assault because when someone is rich and powerful they can get away with fondling women. Once the tape leaked Bush got fired and Trump...well yeah.

Billy Bush was on The Late Show with Stephen Colbert yesterday and basically shut-down the idea that Donald Trump has been proposing lately that somehow he wasn't the voice on the bus saying he likes to grab women, "By the pussy," plus arguably laid-out a case for it being weird that he got fired for simply listening to Donald Trump back in the day while Trump got to become President. Bush discussed how considering Donald Trump's power at that time (and to this day) was there much he could do but laugh and assume Trump was just telling jokes, doing a routine? 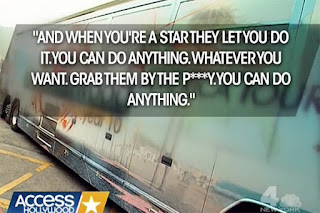 Bush has also written an Op-Ed for the New York Times calling out Trump for what he's said and when on Colbert talked about how he went soul-searching at a retreat, "Off the grid," and when he was checking-in saw Trump being sworn-in as President, following up that story with the simple word, "Irony." They also discussed how Bush was fired from the Today Show and just recently Lauer was fired for actually engaging in sexual misconduct and assault, meanwhile Bush listened to a man brag about it was let go. This all raises the question of if I actually feel bad for Billy Bush?

I still don't really like Billy Bush, I would argue he could have called-out Trump on that bus for his foul language and statements regardless of how much power Trump had. That said, Billy Bush really did get screwed (no pun intended). We see him now saying how he is sad he never even got to apologize to viewers on the Today Show and how he supports these women speaking-out against Trump and basically offering a big mea culpa and I while I wonder how much is legitimate versus an attempt to get back in the public's good graces....yeah, I feel bad for the guy.
Posted by David Charles Bitterbaum at 12:10 PM