Best Newer Comic of the Year: Runaways--2017 in Review 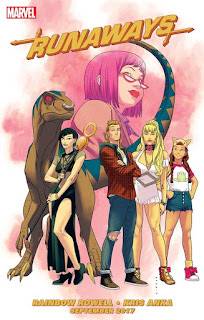 I loved Brian K. Vaughn's series, "Runaways." It was an amazing mini-series that became an ongoing. Then it basically wrapped-up its story of kid on the run from their supervillain parents and at that point the series had not clue what it wanted to do. Besides the occasional short series or tie-in with a big comic-event it really felt like, "Runaways," was struggling to find its purpose, its identity. Marvel hired a writer of Young Adult fiction named Rainbow Rowell for their comic, probably realizing they needed some fresh blood for the series, and the resulting four issues that have come out so far are amazing stuff.

Rowell realizes that these characters have been a bit aimless since they finally defeated their parents and leans into that plot element instead of trying to ignore it. Yeah, these characters don't know what to do with their lives and some of them have gone on other adventures in various series since, "Runaways," but at the end of the day they still are struggling barely-adults desperate for purpose. Whether that means traveling back to the past to try to fix a terrible death, going to college, or trying to get the gang back together in a desperate attempt to feel like things are how they used to be, these are the characters we loved under the pen of Vaughn now being written by Rowell with that same magic. Not too many issues have come out yet, but this is already a fantastic series.
Posted by David Charles Bitterbaum at 10:30 PM