Fourth Time May Very Well be a Charm

This is the fourth entry in the potentially never-ending series of, "The Hot Comics Revue." This is where we discuss books that currently out and getting some buzz, immensely popular, or have steamy potential. As always, I thank my friends at Comics Heating Up for the idea to do this, as they discuss upcoming books that might get hot and this bit talks about ones that are already out. I encourage you to visit them for all your comic speculation needs.

A Book That is Warming-Up
Batman: White Knight (the series in general)
Written and illustrated by the immensely talented Sean Murphy, "Batman: White Knight," has presented an interesting take on what things could be like if the Joker were to become a good guy and in the process points out how Batman is kind of a violent monster when his more-awful enemies aren't present to cast him in a better light. It also had the clever idea to explain the changes in Harley Quinn over the years by making her in fact be two people, with the new third issue resulting in one of the Harley's becoming a new Joker. The book has been slowly heating up and I wouldn't be surprised if we saw this idea of Harley being a Neo Joker appearing in other books as well, making the latest third issue where this happens potentially a sought-after item. The whole series could get pretty hot and I'll be keeping my eye on it. For now you can get the assorted issues for about 10 bucks each on eBay and I could picture prices going up for the first and third issue easily. DC has a possibly huge hit on their hands here. 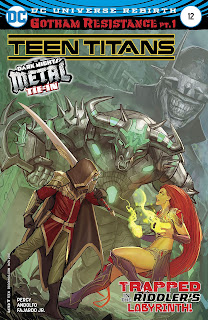 Teen Titans #12
There has been some debate over what qualifies as the first in-comic appearance of, "The Batman Who Laughs," a character in DC's, "Metal," event who is an alternate-universe version of Batman meshed with the Joker. The general consensus has been his first full appearance is in this issue however. As for who he is, its a version of Batman from an alternate reality who is really evil. His visage arguably infringes on the look of Judge Death from 2000AD, but if you're gonna rip-off a creepy face why not take from the best? As, "Metal," has been quite the successful series and ,"The Batman Who Laughs," is arguably the breakout character, his one-shot comic has been very popular and what most have agreed to be his first full appearance-- this, "Teen Titans #12," has become quite the hot book. It is currently going for between $25-$40 on eBay and may very well get even hotter if this Batman makes any other future appearances. 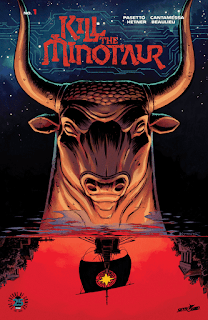 Kill the Minotaur #1 Regular Cover, Skybound Megabox Variant, or Ashcan
A mini-series from the Image imprint Skybound (the same imprint behind the massively successful, "The Walking Dead," comic), "Kill the Minotaur," went six issues and was recently optioned. It has a standard first issue cover, a Skybound Megabox (a popular subscription box from the company) exclusive variant of the first issue, and had a promotional ashcan. These versions of the first issue and the ashcan seem to show a lot of potentail and assuming that the option comes to fruition this could go from steamy potential to blazing hot. 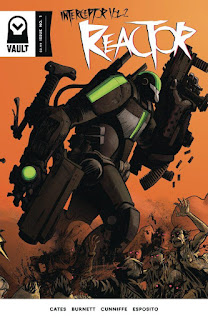 Reactor #1
Donny Cates is a writer who has been on fire lately with hits like, "God Country," and, "Redneck," at Image and has recently started writing for Marvel. He still has some random titles coming out at other publishers however, such as this new book, "Reactor," from the publisher Vault. A sequel of sorts to his book, "Interceptor," that was published by Heavy Metal, if Cates in general keeps getting heat almost anything he does could go up in value. For now it is just hovering around cover-price on eBay, so we shall see.
Posted by David Charles Bitterbaum at 3:19 PM