Best Single Issue of the Year--2017 in Review 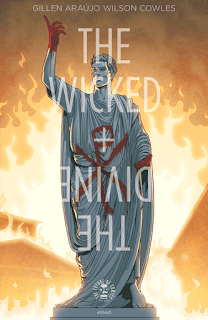 A great single issue doesn't have to be a standalone issue to be my favorite of the year, but this time a one-shot that ties in with, "The Wicked and the Divine," was just amazing. The, "455 AD," one-shot that follows one of the Gods who breaks the supposed rules is just amazingly twisted and weird from start to finish as it is made apparent that the Gods who people nowadays worship as celebrities could wield a dangerous power and pose a huge threat to the world if they aren't kept in check by rules...rules which the main series has seen the Gods currently going against. This individual issue is just smashing and a great standalone way to see why, "The Wicked and the Divine," continues to be a great series.
Posted by David Charles Bitterbaum at 8:39 AM

Email ThisBlogThis!Share to TwitterShare to FacebookShare to Pinterest
Labels: 2017 in Review, comics, The Wicked and the Divine